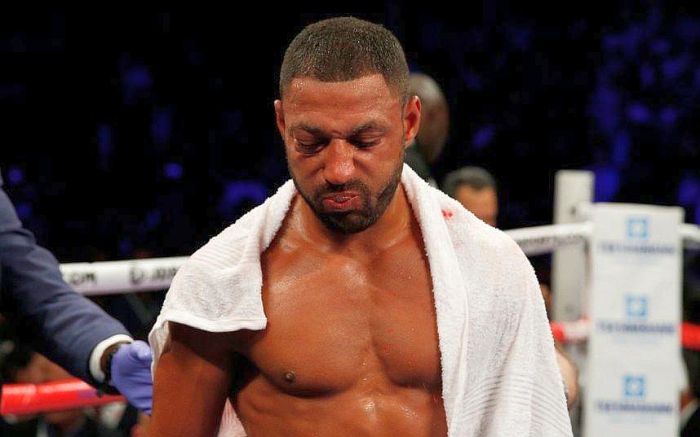 Since defeating Australian Michael Zerafa by points in 2018, Kell brook now 33 will aim to make a comeback to the squared circle in a fight that will set the course of his professional boxing career.

After a 14-month absence from the sport, Kell has penned out two possible conclusions depending on the outcome of his next fight:

1) A victory over Mark Deluca will set the course for another world title shot in 2020.

2) Loosing, Will spell the end of his career and time for the “Special Kid” to hang his gloves.

In a recent interview with Costello & Bunce of the BBC, Brook said:

“This last chapter of my career, I’m giving it my all,” He said. “If I get beaten, I can walk away with my head high, knowing I have given everything.”

“If I get beaten by DeLuca, I will announce my retirement in that ring. If I can’t beat him, what am I doing?”

Uncertainty is unsure, unconfident. Certainty is sure and confident. I’m sure Brook knows that he has some big years left in him to give it his all.

So, what is very likely to happen on the night of February 8th? Let’s first look at how this “Special Kid” paved his way to the blue blood list of the division then plummeted to a state of uncertainty.

The partnership helped him win the British Welterweight Title in 2008 after beating Barrie Jones to a decisive TKO victory, then went on to claim the IBF world title at 147 Lbs in one of the best performances by a British fighter on foreign soil upon defeating “SHOWTIME” Shawn Porter in a controversial majority decision at California, USA back in the fall of 2014.

The Sheffield poster boy was off to a good start as he maintained his reign with 3 successful defenses of his IBF world title.

The winning streak gave Brook the confidence to move up 2 weight divisions and fight then undefeated Kazakh middleweight king Gennadiy “GGG” Golovkin.  Kell Brook was by far one of the bigger framed welterweights in the division and could easily make 165 Lbs.

Unfortunately, Brooks attempt at topping the list in another division was disparaged with a series of unfortunate events.

Undergoing surgery on his right eye after being defeated by GGG and another on his left eye socket when he attempted to fight for a world title in his flagship division (Welterweight) against American Errol Spence Jr. Brook lost to Spence that night.

So should Kell Brook emerge victorious come the night of February 8th here is what his trainer Dominic Ingle has planned for him. The folks at Wincobank want to see Brook fight against an opponent that can simulate a world level fight.

Who do they have in mind?  It’s none other than Australian Dennis Hogan. In a sport like boxing timing is key and the most practical route to claim a shot at a world title would be Hogan. Winning over Hogan would prepare Brook to face Tony Harrison certainly not Jermell Charlo.

Above all, the biggest fight for him would be Amir Khan. Brook was always on the prey for a Khan fight and would go to great lengths to increase his prospects to make that fight happen at the very peak of their careers. To the extent of parting ways with trainer Dominic Ingle and embarking on a partnership with trainer Dave Coldwell and promoter Frank Warren. But as we expected the fight just never materialized.

Which leads to the ironical truth in the sport of boxing! Some fights just don’t happen when fighters are at their best. After all isn’t that we want to see ?

The best fight the best! blue blood against blue blood…..Holyfield vs Douglas,Tyson vs Lewis,Pacquiao vs Mayweather so then why not Brook vs Khan!