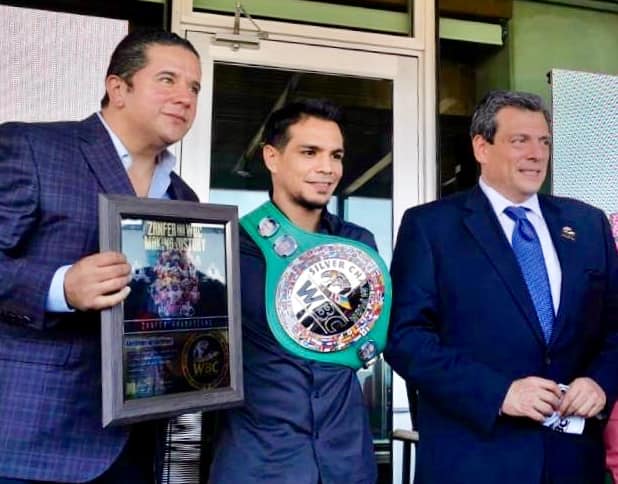 Braveheart Zepeda – who last October 3 stopped Belarusian Ivan Baranchyk in a thriller fight of the year candidate – was handed his silver strap from the hands of the president of the WBC Mauricio Sulaimán.

The president of Zanfer Fernando Beltrán and the president of Fecombox Juan Carlos Pelayo were honorary witnesses for the small yet meaningful ceremony.

José Zepeda said that he felt privileged and proud to receive a WBC belt — a title that he has always warned, hoping to earn the WBC regular belt in the near future.

“I am very proud and very motivated to receive this recognition.

“We didn’t plan a fight like that (against Ivan Baranchyk), but that shows how (things in boxing can) turned out; and I’m very happy to have won, and now received this belt.

“This triumph over Berynchik has earned a lot of world attention,” commented Zepeda.

“(So) I hope that WBC/WBO Super lightweight champion José Carlos Ramírez, whom I already faced, would fight me again.

“In fact, for many fans I beat Ramírez (in our fight). I think I beat him. (If) he has all four titles, then let’s face each other one more time.

“I’m already an official 140 pound challenger, although I could also go down to Lightweights (135 lbs) to face the winner of Lomachenko and López,” shares Zepeda.

When giving a Jose “Chon” Zepeda his belt, 🇲🇽 Mauricio Sulaimán recognized that Zepeda is the sample of what the spirit and heart of a true Mexican warrior represents in the ring.

Mauricio encouraged him to continue preparing and training to take advantage of the opportunity to become a regular world champion.

“For the WBC it is a pleasure and a pride to give the belt to boxers who leave everything inside the ring and who are an example ouside the ring,” said the Sulaiman.

“Jose Zepeda is now a great WBC Silver champion and we give him his belt with all honor and merit,” Sulaiman added.

Meanwhile, the president of Zanfer Promotions, Fernando Beltrán, pointed out that José “Chon” Zepeda wrote his name in gold letters in the history of boxing, starring in a fight that will transcend generations (with eight falls in total, against Ivan Berynchik, to proclaim himself WBC 140-pound champion, and assured that he will soon be world champion.

“What a great fight, like one of those historical ones from a movie.

“Zepeda just gave all to us. He is deservedly a WBC “silver” champion, soon he will be “regular” world champion.

“Because Zepeda is at the level of the bests against whoever you put him against.

“For many people – as well as for me, personally, I feel that Zepeda has already beaten champion José Carlos Ramírez, and we hope to face him soon,” said Fenando Beltrán.

In addition, Mauricio Sulaimán took the opportunity to present Zanfer and its president Fernando Beltrán with a plaque of recognition for having returned to boxing activity in times of pandemic, while promoting prevention and health protocols proposed by the WBC itself, staging closed-door shows that have reached national and international audiences.