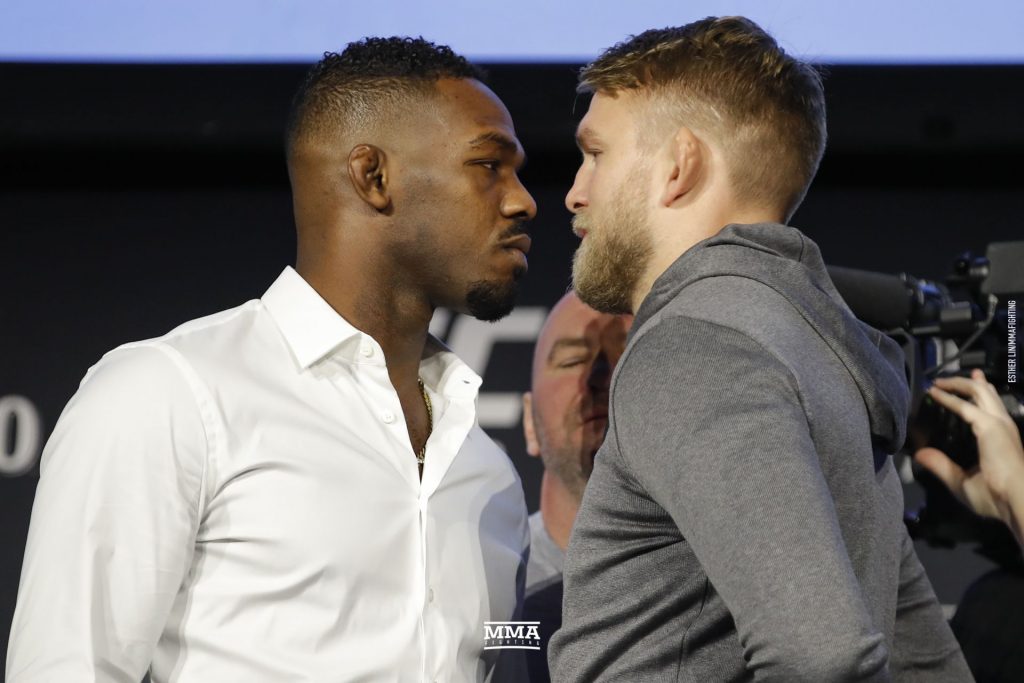 Jon Jones and Alexander Gustafsson both believe they won their first fight at UFC 165.

At the time, Jones (22-1, 1 NC) was looking to set the UFC record for most consecutive light heavyweight title defenses while Gustafsson (18-4), one of the only fighters on the UFC roster who doesn’t have to look up at the towering champion, stood in front of history.

After a bloody five-round war, Jones cemented himself in the record books with a gritty decision win over Gustafsson.

It was truly the first fight Jones appeared anything other than unbeatable, and looking back, the champion admits he could have taken the fight more serious.

But now, more than five years after their initial scrap, the two pugilists will run it back in the main event of UFC 232 in December.

“The last time I fought Alexander Gustafsson, a lot of people — I remember the media saying, ‘You know, he’s a lot like Jon Jones. He’s tall, he’s lanky,’ and everything like that,” Jones said during the UFC 232 press conference in New York City. “I was hot, I was on a roll, and I just figured maybe he’s a lot like me but he’s not me. So I didn’t train as hard as I should have. I was winning so many fights and being a wild dude and I was still winning, and it caught up to me. It definitely caught up to me.”

Hearing enough, a smirking Gustfasson snatched up his microphone to cut off his rival off mid-sentence.

“Excuses,” interrupted Gustafsson. “All I hear is excuses. That’s all I hear. Nothing else. I beat you once, I can beat you again.”

Never one to back down, Jones didn’t hesitate to snap back.

“If my excuse was that I didn’t train hard enough, what’s your excuse for losing?” asked Jones.

Smiling, Gustafsson took in the crowd’s reaction before clapping right back.

“That’s where you’re wrong,” responded Gustafsson. “I didn’t lose Jon. We all know that I didn’t lose.”

Since their first fight, both fighters have struggled to remain active for drastically different reasons.

Jones found himself mired in controversy following a series of failed drug tests and a highly-publicized hit-and-run incident in Albuquerque. Gustafsson, on the other hand, failed to secure UFC gold against Daniel Cormier in their title fight at UFC 192. Since then, several injuries have forced “The Mauler” to watch from the sideline.

Brushing off the trials and tribulations from the past few years, both Jones and Gustafsson continued their verbal assault on one another.

“Did you beat DC as well?” asked Jones. “We had a close fight, but did you get ripped off in the DC fight as well? You beat me but lost to DC? What about Anthony Johnson? What about Phil Davis? Did you beat him too? I’m just trying to give you a psychological evaluation.”

“It was a split decision, I lost,” responded Gustafsson. “But I will beat you. Whatever it is, I still beat you.”

Jones and Gustafsson will finally get to settle their difference when the cage door closes UFC 232 inside the T-Mobile Arena on Dec. 29 in Las Vegas.

“I respected him too much the first fight,” said Gustafsson. “This fight, I’m not going to give him the respect I gave him the first time. I will push him and show the world I can beat the man that’s never been beaten before.”