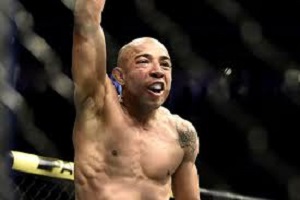 Jose Aldo lost his bantamweight debut against Marlon Moraes at UFC 245 last December. But just a few days ago, it was announced that the former long-time featherweight champion will be challenging 135-pound titleholder Henry Cejudo at UFC 250 on May 19th.

Top contender Aljamain Sterling hasn’t been happy about these recent developments in his division. Speaking on a recent episode of The Luke Thomas Show, the “Funk Master” shared his thoughts on why the UFC chose to give Aldo a title shot, despite coming off a loss.

“I’m not inside the UFC’s organization so I don’t really know what the UFC brass does,” Sterling said (transcript by BJPenn.com). “But I would imagine it has something to do with Jose Aldo being able to bring in more money through Combate or one of those Brazilian sponsors.

“From where I stand they’re milking him for every last dollar they can while he’s still around.”

Aldo is currently on a two-fight skid, and for Sterling, that could be a factor in terms of fan reception of the entire card.

“I don’t think it’s going to be a PPV draw so to speak,” he said. “Being a guy coming off two losses, I understand he’s a popular guy in terms of what he has done in the past. But to be honest this is about ‘What have you done for me lately?’ And lately, 2-4 in your last six fights is not a very good number to have that warrants a title shot. You don’t see that too often.

“I’m just going to say Jose got lucky with this one.”

UFC 250 is set to take place in Aldo’s home country of Brazil.