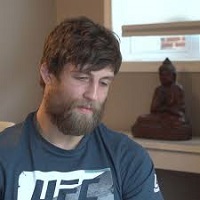 Andrew Sanchez is a unique character in a sport teeming with unique characters. A soft-spoken bundle of nerves with a serial killer undertone. He flashes an inviting smile when speaking about his friends. He pierces you with a cold stare when it comes to his opponents. Breathe easy if Sanchez is on your side of a barroom brawl, run for your life if you stand across from him.It reeks like I’ve never smelled before and it’s very distracting.

I did not know what to expect when I arrived at Sanchez’s Airbnb during fight week at UFC Ottawa. He was fighting regional fan-favourite Marc-Andre Barraiult. I was short on questions and one colleague even asked me, “what is there to talk to Andrew Sanchez about?” It turns out, a lot. Any good interviewer will tell you how important it is to break the ice with your subject. Fortunately, I had UFC veteran Eric Spicely to take care of that.

“I’m here with Eric Spicely, my buddy, and he just took a massive s—t apparently,” Sanchez chuckled in what was either the second or third take of our on-camera interview. “It reeks like I’ve never smelled before and it’s very distracting. I don’t know what to think.”

Turns out, Spicely thought this interview would be the perfect time to prank us with “fart spray.”

Most UFC fighters were cooped up at the UFC hotel all week, but Sanchez and his team scored a beautiful Airbnb. It was all a matter of circumstance. “The last Airbnb we booked was double booked apparently. We had some guy knocking on our door. He had a key somehow, so he just let himself in,” Sanchez reflected. “He was like, ‘What are you guys doing? Get out!” We’re like, ‘No, you get out. F—k you.’ Suddenly it’s this big back and forth. Everyone’s yelling at the host. Disastrous. It turned out we had to leave, but we got a sweet upgrade. It turned out to be a positive at the end.”

I vividly remember asking The Ultimate Fighter winner to hold his microphone still. “I’ll try. I’m nervous. Interviews man…” he admitted. It was a peculiar moment of vulnerability from a man who probably weighs 200-pounds and can shred me from limb to limb. It is easy to build up these fighters as something beyond-human. It was a reminder that his element is the cage. At this moment, we were in my element.

It’s this huge build-up and you sacrifice and do everything you can do… This is the crunch time and you want it to go perfectly. The accumulation of this big moment.

The nerves definitely extend to fighting. Sanchez does not like to be around his fellow athletes during fight week. In fact, he wants to be as far away as possible. “It’s this huge build-up and you sacrifice and do everything you can do,” he confessed. “This is the crunch time and you want it to go perfectly. The accumulation of this big moment.”

“When I used to wrestle, we would wrestle every weekend. If you f—k up and lose, you have next weekend to get it back,” he shared. “I always have the longest fight camps, like 12 weeks. You have to fight and it’s this countdown to this huge moment…” he added before losing his composure. “It’s getting worse. The smell is still here.”It’s getting worse. The smell is still here.

“I feel like it’s getting easier, but in all reality nothing has changed,” he said of fighting professionally. “There shouldn’t be any more or less stress. There is equally as much on the line. I feel like the more I do it the more normalized it becomes,” Sanchez added. “F—k, when I was in college and I was wrestling, I couldn’t sleep before meets and tournaments. Don’t even talk about nationals, my god, the whole week I was super high-stressed. It carried over to fighting, but I’m 31, it’s getting easier and easier. It’s another day, I guess.”

Sanchez went undefeated across his first three professional fights. He finished all three of those fights in the first round, but they might as well have been a dream: “When I first started fighting — I wasn’t a fighter, I was a wrestler going into a cage. I had never really boxed before and this guy is trying to punch me. I would just black out. I wouldn’t remember the whole fight.”

I’m going to f—king bludgeon this guy for three rounds. That’s the plan. Honest to God.

The entire interview had a pleasant undertone. We cracked jokes, Sanchez shared his analysis on fighters like Khalil Rountree and Elias Theodorou — and then we talked about his fight. I asked Sanchez a pretty standard question to wrap up: “What is your prediction on the outcome of your fight?” Suddenly, Sanchez’s demeanor changed. His gaze pierced me and my Spidey-senses went into overdrive.

“Come on,” he said, grimly. “I’m going f—king bludgeon this guy for three rounds. That’s the plan. Honest to God.”

The fight itself is what you would expect from Sanchez and a Canadian (see Sanchez vs. Ryan Janes), an unadulterated brawl. Sanchez played a thinking man’s game early, keeping Barriault at bay with a long jab and initiating takedowns on the half-step. The game plan served him well in the first-round, but the second-round conjured the Sanchez of old. Barriault landed hard uppercuts and elbows in the clinch, the sort of shots that could send company one’s jaw into their own forehead. All hell broke loose. Sanchez absorbed big shot after big shot, but his feet were firmly planted. Like something out of The Walking Dead, Sanchez pressed forward and fired back. He survived one last onslaught to stamp the second round. He was bloodied and battered.

The fight was clearly 1-1 heading into the third and I couldn’t help but wonder which Sanchez would rear its head. Would he “black out” like in his previous fights or has he learned to tame his wild side. Sanchez kicked off the third and immediately relied on his wrestling. No more brawling, no more big shots. He closed the distance often, pressing Barriault against the cage and taking him down on multiple occasions. He earned a hard fought unanimous decision. More importantly, perhaps, he found common ground between his inner Bruce Banner and Hulk.

In the 15 minutes I shared with Sanchez before his fight, I experienced laughter, curiosity, admiration and the sort of uneasiness I’ve only felt watching The Shining. I left the Airbnb with a whole new understanding of who Sanchez is. Oh, and I ran into him after his win over Barriault. All pleasant, no serial killer.