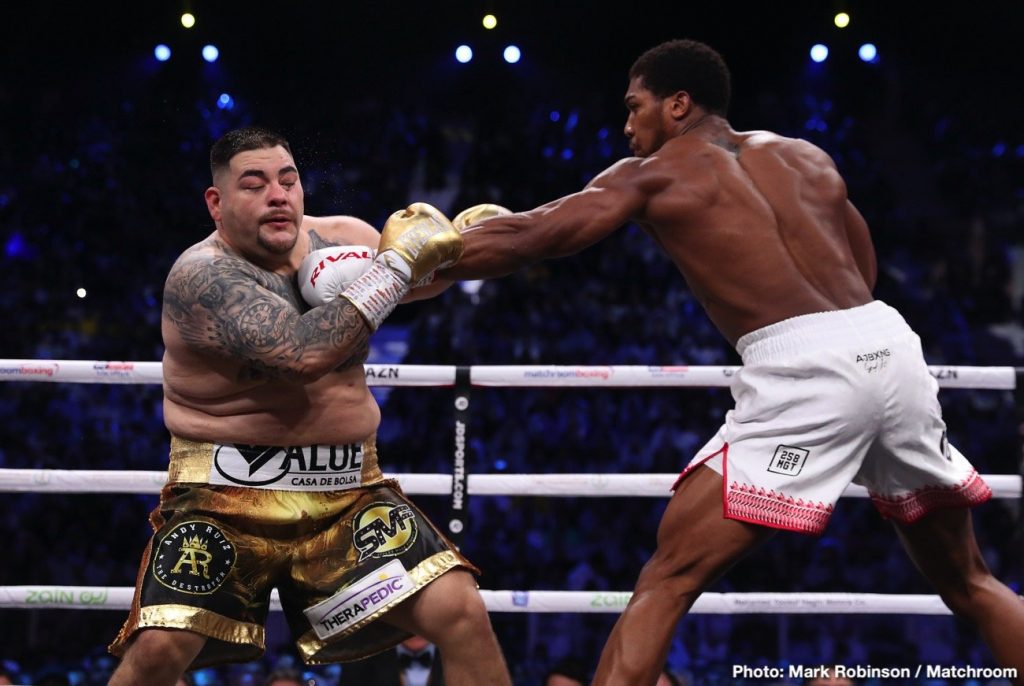 Rewind three months, and Andy Ruiz and Deontay Wilder held between them all the world heavyweight titles (save the lineal crown Tyson Fury holds). Now, both men are attempting to return after suffering a one-sided defeat. Ruiz was out of shape and was widely outboxed and outscored by Anthony Joshua in their big rematch. Wilder, coming in too heavy, and later complaining of having work ring apparel that was too heavy, was banged up and beaten up by Tyson Fury.

Speaking with PBC of Fox, former WBA/IBF/WBO heavyweight champ Ruiz says that he feels Fury “could do it again” in a third fight with Wilder, and that he himself can come back and “do it again.”

“I think Tyson Fury did an awesome job. He did everything that he had and his ability, his long reach and all that and he’s the man right now,” Ruiz said. “I has flashbacks to my fight [with Joshua] on June 1. It was kind of similar. It was in the same round as well so it was pretty crazy but good for Tyson Fury. I think Fury did that he had to do, he stuck to the game-plan. I’m pretty sure he could do it again and I could do it too so, if they pick me, I’m here and I’m ready.”

Ruiz added how he was “shocked” at what unfolded on Feb. 22, that he had picked Wilder to beat Fury. So now we fans are wondering if both Ruiz and Wilder can come back and rule the world again? It could be argued that Ruiz beat himself in the return with Joshua, that he was out of shape. And though he was comprehensively outboxed in Saudi Arabia, Ruiz didn’t take too much punishment; certainly not as much as Wilder took in the Fury rematch.

Who knows who has the greater strength of mind to come back, Ruiz or Wilder. As for a Fury-Ruiz fight, that would be interesting. Though Ruiz would be giving away a lot in terms of height and reach, “The Destroyer” does have those incredibly fast hands. Maybe Ruiz would give Fury a far tougher fight than Wilder managed at the weekend.

We await Ruiz’ return fight as we await Wilder’s next move. Wilder seems determined to take that third fight with Fury, while Ruiz has yet to pick his comeback foe. There is talk that Ruiz may fight Luis Ortiz next. Above all, though, Ruiz says he wants Fury: “I just want a shot with Tyson Fury,” Ruiz said.