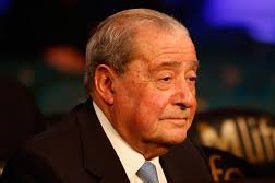 “Eddie Hearn is an okay guy but he’s too full of himself to really be effective,” Arum told World Boxing News in an exclusive interview.

“He’s spending more money on these shows than Haymon is on PBC. Or even what we’re doing on ESPN. (The difference is) We both understand the U.S market, which Hearn doesn’t.”

Arum even goes so far as to say that DAZN executives would be better served by having Oscar De La Hoya in charge of their domestic programming in the U.S., saying that Hearn doesn’t have so much as a clue. In particular Arum points out a recent DAZN card held in Philadelphia, saying attendance was poor because all of the tickets were being sold out of the U.K. for a fight that was being held an ocean away.

“You don’t run a promotion in the U.S from the UK and have all the tickets come out of the UK. It makes no sense.”

Arum concluded by saying that Hearn’s for father, Barry, was a terrific promoter because he was wise enough to operate from behind the scenes, whereas he thinks Eddie is too preoccupied with running the social media circuit as a means of stroking his own ego.