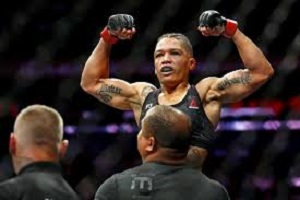 Please excuse Sijara Eubanks if UFC Rochester starts to feel a little familiar by the time Saturday night rolls around.

That’s because after a seesaw two-year experiment at flyweight, one which featured plenty of ups and downs, Eubanks will make her return to the 135-pound division against undefeated contender Aspen Ladd. The last time Eubanks competed at bantamweight was in a 2017 Invicta FC contest against none other than…Aspen Ladd. It’s a night that also doubles at the last time Eubanks tasted defeat in any sort of professional setting.

That sort of serendipity is the kind that rarely rolls around in the fight game, so suffice to say, Eubanks was happy to hear her first marching orders back at 135 pounds.

“I always kinda wanted that one back,” Eubanks told MMA Fighting. “When we fought in 2017, I felt like I didn’t have the greatest camp or the greatest plan that night. But I also felt like, as a fighter, it’s kinda hard to be on that, ‘oh, run it back.’ You know? You’ve gotta move forward, you’ve gotta keep going on with life if you don’t get what you want on certain fight nights. So I did. I was like, well, I hope this comes back around one day.

“And when I first announced that I wanted to go up to 135, I kinda had no idea who I was going to get or where they were going to put me, then (my manager) Ali (Abdelaziz) came back and asked me about Aspen. I kinda felt like it was a perfect storm. My last fight at ’35, my last loss — a chance to sort of kill two birds when with one stone — so I was really pumped to hear her name come up and to see that contract come through.”

For Eubanks, who finished as a finalist of The Ultimate Fighter 26, this weekend represents more than just a shot at revenge. It also represents the start of what the 34-year-old hopes will be a swift title run in the UFC’s wide open bantamweight division.

As it stands, “Sarj” is undefeated in the UFC, the owner of a combined 5-0 promotional record between her three TUF 26 exhibitions and two official Octagon wins. But her progress in the women’s flyweight division was always going to be hamstrung by her struggles on the scale. Between losing an opportunity to vie for the UFC’s inaugural flyweight title in late 2017 because of weight-cutting complications, and outright missing weight by 1.2 pounds for her rematch against Roxanne Modafferi, the writing was on the wall for Eubanks about her future at flyweight after UFC 230.

But now that she’s gotten a full training camp under her belt at 135 pounds, it’s become abundantly clear to her that the move back up was the right decision.

“I don’t plan on making that cut again anytime soon,” Eubanks said, laughing. “This is my home. I’ve got goals to be UFC champion, so I’m not going to get to that belt by jumping around weight classes a bunch. So now that’s I’m here, I’m comfortable. I feel like an athlete for the first time in two years, so I’m excited to really be explosive and powerful.”

Eubanks said the difference in camps between the two weight classes may have well been night and day. At flyweight, every hour of every day was focused on weight management, often to the detriment of her overall development as a fighter. But at 135 pounds, the fun has reentered the training room, and Eubanks feels like a professional athlete once more.

“I’ve always been super muscular,” she said. “I’ve always had a lot of muscle mass, and cutting from flyweight requires me to do a lot of metabolic conditioning and a lot of slow burn, long distance cardio. So I wasn’t able to really do any of the fun stuff, because everything was like, ‘you can’t put on anymore muscle, you can’t put on anymore muscle,’ so I couldn’t really push my cardio, I couldn’t really push my grappling. I couldn’t do any lifting and strength and conditioning really. So it was like, you can hit mitts, you can do your training, and then I just had to run long, slow jogs a lot — and it’s boring. It’s boring and it sucks. I hated it.

“I ate what I was supposed to eat, I ran what I was supposed to run, it was f*cking miserable and it sucked and I did it anyway and I still had bad cuts. And just now, at ’35, I’ve got that wiggle room where I can be explosive. I can lift weights, I can wrestle, I can put the gas in the engine. I don’t need to worry about, like, ‘Oh, okay, I went over on my carbs by four grams. I’m going to have to run an extra 30 minutes.’ No, I can hit a run now. I can actually run for cardio, for conditioning, and not run for that half-walk, half-jog just to burn fat. So I’m able to just have more fun in training, and that’s what it’s about. This isn’t the kind of sport where you want to come in and be miserable when you’re coming to work everyday.”

It’s been an all-too-welcome revelation for Eubanks as she prepares for her second shot against a talented young foe.

Though it is early, Ladd has already established herself as a prospect to watch in the UFC with vicious back-to-back TKO stoppages of veterans Lina Lansberg and Tonya Evinger. The latter victory elevated Ladd to the No. 6 spot in the UFC’s official rankings, meaning a title shot in a division devoid of obvious contenders could be right around the corner.

But after losing a decision to Ladd back at Invicta FC 21, Eubanks is coming into UFC Rochester with a point to prove, knowing full well that she is better than what she showed in 2017.

“I just remember the fight being probably tougher than I expected,” Eubanks said. “I just was kinda super cocky at the time and just felt like I should blow through everybody. I didn’t think anybody could beat me in a fight, and that’s not the wisest mindset to be in and a really amateurish mindset. So I remember being halfway through the fight and being like, ‘Yo, am I winning? Am I losing? Like, what’s going on? This is a high pace.’ And I remember going to the corner and not really understanding [what was happening].”

Two years may not feel a long time, but in a mercurial sport like mixed martial arts, it can be a lifetime. That’s the case for Eubanks, whose own personal story has added a novel’s worth of chapters in the 28 months since she and Ladd first exchanged blows. And now, back at a familiar weight class against a familiar foe, “Sarj” is eager to kick off what she hopes will be a pivotal 2019 campaign for her career.

“It’s only been two years but it’s felt like it’s been a lot longer, just because of the journey I’ve been on,” Eubanks said. “I mean, everything is different from 2017. I’m on a different team, I’ve been through The Ultimate Fighter, I’ve been through this hellacious journey at flyweight. I had a kid. There’s all kinds of stuff that’s happened since [Ladd and I] last met, so it’s really exciting to be able to go through all that change and all that evolution, and to be able to display the new kind of fighter I am on May 18th.

“Everybody evolves between fights, but the type of growth I’ve had in the last two years feels really exponential. I’m really excited to show it, to show the world what I can do.”