Marcos Galvao held the Bellator bantamweight belt on Thursday. Eduardo Dantas took it from him on Friday. – Bellator MMA

Get the results of tonight’s Bellator 156: Galvao vs. Dantas 2 card at the SaveMart Center in Fresno, California.

Bellator 156 is wrapped up, and Eduardo Dantas is once again the promotion’s 135 lbs champion. He put on a virtuoso display against Marcos Galvao, who had no answers for Dantas’ terrific striking clinic and takedown defense. When Dantas KO’d Galvao in 2013, that was a title defense for Eduardo. This time around, Galvao entered as the champion, Dantas as the challenger, and Galvao was just completely dominated from round 1 to round 5. The end of round 3 had me thinking a corner stoppage was justified, but this is MMA, those things don’t exist, and I’m sure Galvao being the champion made an already slim possibility of that happening become a zero-chance outcome.

Not only is Dantas 2-0 against Galvao, he has his belt back. Darrion Caldwell vs. Joe Taimanglo likely awaits the Nova Uniao fighter in his first title defense as the (re-)newly crowned champion.

Also of note was Brandon Halsey being on the wrong end of another very sizable upset. Here are the results and highlights from tonight’s main card.

Dantas opened the championship fight with several inside leg kicks to the champion’s lead leg. Galvao returned fire with his own. Eduardo’s jab was on point in the early going. Marcos caught a leg kick and then went for a takedown but Dantas was able to thwart it. It was very much a feeling out process for the majority of round 1. Neither man landed a major strike. Dantas’ measured approach and crisp striking posed huge problems for his former teammate. Galvao was getting his head snapped back by hard straight rights. Dantas continued to use the leg kicks to great effect, and his fast combinations had Dantas bleeding from his nose. Galvao couldn’t get the fight to the ground. Marcos was a tad more competitive in the final minute of round 2 but it was a clear win for the challenger.

Round 3 was by far Dantas’ best round. Jabs, hooks, leg kicks, power punches behind the jab, spinning back kicks, they were all in play for Dantas. Galvao’s right eye was just about swollen shut as Eduardo’s pinpoint precision just was too much for Galvao to handle. Galvao was visibly frustrated and hurt multiple times by Eduardo’s combinations to the head. The doctor checked on Galvao but the fight continued into round 4, where Galvao’s early takedown attempts were easily stuffed by his foe. Dantas rocked Galvao with a right high kick to the dome, followed up with a jarring uppercut. Another spinning back kick connected to Galvao’s midsection. Dantas started ripping Galvao with crushing rights to the body. The action slowed a bit in the final minute of the 4th, but Galvao offered nothing of substance.

Galvao drove for his 1st successful takedown of the fight and instead ended up on his back early in round 5. They did return to their feet but Galvao obviously needed a finish or else he would lose his title. Admittedly, Dantas let his foot off the gas and wasn’t as aggressive as he was in previous rounds, but he did taunt Galvao by winding up his right arm. Galvao was swinging at air, and on the odd occasion when he did land, the punches had no steam on them. They ended the fight in the clinch, then separated by Big John McCarthy, and the bell sounded seconds later to conclude a woefully one-sided championship bout.

Finish aside, this fight reeked. No two ways about it. There was plenty of clinch stalling with occasional moments of actual excitement. Jambo staggered Njokuani early in the 2nd with a right hand, clinched up, and then he kneed him in the groin. Referee Mike Beltran later separated them from another clinch and Njokuani connected on a big right that had Jambo wobbly, but Njokuani didn’t follow-up effectively, and we were subject to more stalling. Njokuani unleashed some violence in the 3rd, drilling the Brazilian with a body kick that instantly felled him, before KOing Jambo with heavy ground-and-pound. It’s a short-notice loss for Jambo, who filled in for Douglas Lima (now off to fight Paul Daleyin London next month).

It’s another disappointing outing for former Bellator middleweight champion Brandon Halsey, who was bloodied and later choked out by John Salter in the 1st round. Salter took the early initiative by landing a left high kick, which cut Halsey along the right side of his forehead and forced the referee to call in the doctor to work on his cut. The fight resumed, and towards the end of the round, a very bloody Halsey secured a takedown into Salter’s guard. It took just seconds for Salter to set up a triangle choke, and even quicker for Halsey to tap out. Salter’s 15 career fights have all ended in a finish, whether in victory or defeat, and this one was a huge win against the ex-champ, who has now dropped 2 in a row. Salter confirms his status as a new contender in Bellator’s 185 lbs division. 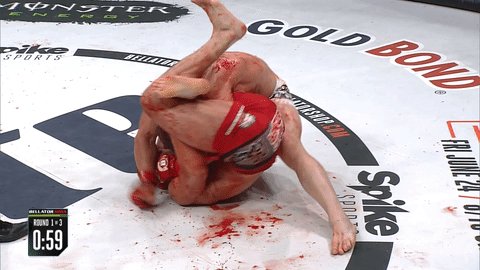 Parlo started out landing the better combinations on Honeycutt, as well as stuffing all of his takedowns in the opening round. Honeycutt was unable to win multiple striking exchanges in the early stages and into round 2, but Parlo nearly got himself into trouble when he whiffed on a spinning backfist and had to scramble to avoid getting his back taken. Honeycutt, who seldom kicked and almost exclusively boxed, started finding his rhythm and scoring with his own punches and backing Parlo up in a closely contested 2nd stanza. The American backed up the Dane with his jab in the 3rd, and Parlo was clearly fading. His punches had no steam on them and Honeycutt was tagging Parlo with several solid punches. Parlo froze Honeycutt with a superman punch and then shot for a takedown in the final minute, only for Honeycutt to stuff it and turn it into a late takedown of his own.