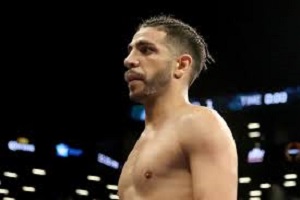 Following a wide loss to Tevin Farmer in an IBF super featherweight title bout today in Australia, Billy Dib officially announced his retirement from the sport in an emotional post-fight interview.

“I just wanna say thank you very much, and guys, this is officially the last time that I step into the squared circle,” he said.

“I want everyone to know that no matter what happens in your life, just keep working hard and dreams come true. This was a dream of mine, to fight for a world title at home, and I’ve done it. Thank you very much.”

Dib, 32, retires with a career record of 43-5 (24 KO) and as one of the biggest Australian stars of boxing during his time in the sport.

The obvious career highlight for Dib came in 2011, when he defeated Jorge Lacierva to win the vacant IBF featherweight title. From there, he made successful defenses against Alberto Servidel and Eduard Escobedo, before losing the title to Evgeny Gradovich in 2013.

He received a rematch with Gradovich eight months later, but was stopped in that contest, and his career never really rebounded. He moved up to 130 pounds, where he rattled off a few wins over journeyman fighters, before he was stopped in three by Takashi Miura in a WBC title fight in 2015.

Dib won four more fights before this opportunity against Farmer came up, and while he gave a real effort, he was simply outclassed by Farmer, who was too quick and too slick.

Dib was never a truly elite fighter in his career, but he was a titleholder at 126 and a two-time title challenger at 130, and got to fight all around the world, from Australia to the U.S., Macau and Japan. It’s safe to say that overall, the man did indeed live his dream over a 14-year professional career.