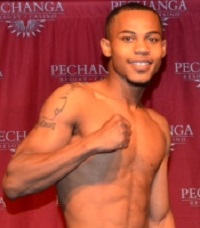 Congrats on your victory over Yaqub Kareem, can you give us some thoughts on your performance? Honestly, I thought it was an ok performance. I feel like the work I’ve been putting in with my strength and conditioning team came into effect. I felt stronger in there, but I still give myself a B- because I still need to find the balance in between throwing power shots and moving how I was before I started to sit down on my punches, but overall I got the guy out of there in the fourth round and that’s always a plus. Right now we’re going to keep working while I’m perfecting my game.
GL: Other than balancing out your power and your movement, is there any other reason you give yourself a B-?
JaRico O’Quinn: “Just being loose and being more comfortable as a professional, which is something that comes with time. Being a professional in that ring under those lights isn’t the kind of thing that happens overnight.”
GL: Would you like to fight on Shobox next or do you want some more development before you put yourself on the national stage?
JO: “I’m ready for it and I think that’s just going to bring out another level of me. I think it’s going to make camp even more intense. Camp is pretty intense now and I’m not sure how much more intense it can get, but I’m sure it will when I take my step up. It’s just a mindset of knowing that I’m going to be on TV, it’s going to make me grind harder. When I fight on TV it’s going to be a fight that means everything to me.”
GL: Any indications on when the next one might be?
JO: “Not yet, I don’t know anything right now. I plan to take a few days off and then get right back to the gym to get ready for whenever it is. If they call me and tell me I’m fighting at the end of July I’d be ready.”
GL: Is getting two more fights in this year a goal of yours?
JO: “I want to fight as many times as possible. I’d fight every month if I could. I feel like I just put the 115 pound division on notice with my last performance and the 118 division been on notice. My goal is to take a few more fights at 115, get my TV opener at 115 and then go for one of the top guys at 115. I’m going to want a title, I’m going to want to defend it and then move up to bantamweight.”
GL: I saw you came in at 116.25 pounds the other day...
JO: (cutting in) “I really came in at 115, they made me drink something to get my weight up a little bit because my opponent came in over 120, almost 121. I was ready to go at 115, but I had to put on a little extra to make it an official bout.”
GL: So the immediate plans are for 115, does this mean you’re not going to messing with 118 anytime soon?
JO: “I could go at either way, but I want to shoot for a title at 115 first. As long as I feel strong at that weight I’m going to hold it and then I’ll move on up to 118.”
GL: If you had it your way, who do you fight next?
JO: “I haven’t even scouted the guys at 115 yet, but I know Ryan Barnett is a tough guy that looks good and solid at 115, so maybe me and him could fight for a title one day, but I leave that to my team and we’ll see what they come back with.”
GL: Is there anything you’d like to say in closing?
JO: “Keep following me because I’m going to keep on giving y’all crowd pleasing performance. It was an exciting performance from round one till round four and I’m going to keep the crowd on their feet whenever I’m in the ring. Keep on supporting me because I fight for y’all. Make sure you go to the next one because it’s going to be another great fight from me.”