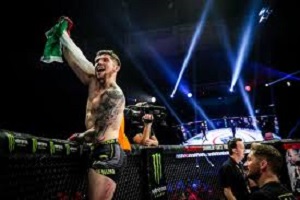 Ricky Bandejas called for more challenges against SBG charges following a win over Frans Mlambo at Bellator Dublin on Saturday night, and veteran Irish campaigner Brian Moore believes he’s the man who can claim vengeance for the gym.

Bandejas and Moore have verbally agreed to bout via social media in the past, but “The Pikeman” wasted no time in declaring his interest in defending SBG’s honor following Bandejas’s stoppage wins over James Gallagher and, most recently, Mlambo.

Shortly after he published the tweet, another high echelon Bellator bantamweight, Patrick Mix, expressed interest in a meeting with an SBG fighter.

Atleast Ricky got to these SBG dudes bc they normally stay running from real Gs66:20 AM – Feb 23, 2020Twitter Ads info and privacySee Patchy Mix’s other Tweets

“I’ve been fighting these killers at 145 in Bellator, I didn’t drop down to bantamweight just to make up the numbers. I’m here to be the champ and you only get that by beating these caliber of guys,” Moore told MMA Fighting’s Eurobash podcast.

Moore underlined that Bandejas is the fight that he is currently pursuing.

“I think Mix is a great fighter, and I’d love to put myself against him, but I really want that Ricky Bandejas fight. Both of us have been building this fight for quite a while, both of us have agreed to it – all we need to do is be sent contracts right now,” he explained.

“Now, the narrative is he is the SBG hunter etc. Well, I’m the most experienced SBG guy there is. Besides a two-year hiatus from the sport, I’ve been in SBG for nine years now, so if you’re going to bring SBG’s name into it, you’re bringing my name into it.”

The Irish stalwart gave his take on Mlambo’s loss to Bandejas and feels like his experience will play a big part if they should meet.

“I’ll be a different kettle of fish. We seen what Frans was able to do. He done really good, but Ricky used his experience to overcome that and now he’s going to fighting someone that’s been around and that has been in wars. He’ll need a shotgun to get me out of there, simple as that. I can’t wait to get in there with him, I’m sure we’re going to fight.”

Moore insisted that he would be open to fighting Bandejas in the U.S., U.K, or in Ireland.

“I’d love a U.S. fight again. Dublin is great because it’s two hours down the road for me, but it’s also an iconic place for mixed martial arts right now. But Bellator is a U.S. promotion, so I’d like to be spreading myself over both regions to be honest and building my name even more across Europe and then showing the U.S. fans what I can do as well. A lot of them are familiar with my name already, but not at bantamweight – not at 135 where I will be the champion. The sooner the better, whether it’s in the States, in the U.K. or in Ireland – I don’t mind – but me and Ricky is inevitable.”