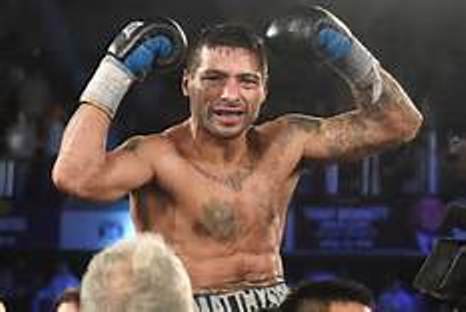 Lucas Matthysse dominated Emmanuel Taylor in his return to the ring.

Lucas Matthysse showed no signs of ring rust after a year and a half out of the ring, physically dominating a game Emmanuel Taylor en route to a fifth round stoppage tonight on HBO pay-per-view.

Matthysse, 34, hadn’t been seen since an October 2015 loss to Viktor Postol, where he was broken down and made to quit, and there was talk of him possibly retiring from boxing during his lengthy absence. Instead, he’s back strong with new trainer Joel Diaz, who seemed to have Matthysse mentally focused and working off of a great game plan.

Taylor, 26, had never been stopped before, and to his credit did land some shots. He was the slightly more accurate puncher of the two and is a capable fighter, but Matthysse didn’t respect or even acknowledge his power in the fight, and was able to overwhelm him with raw power.

How do you see Matthysse doing as he goes forward in the packed 147-pound division, now that you’ve seen his return to action go this well?