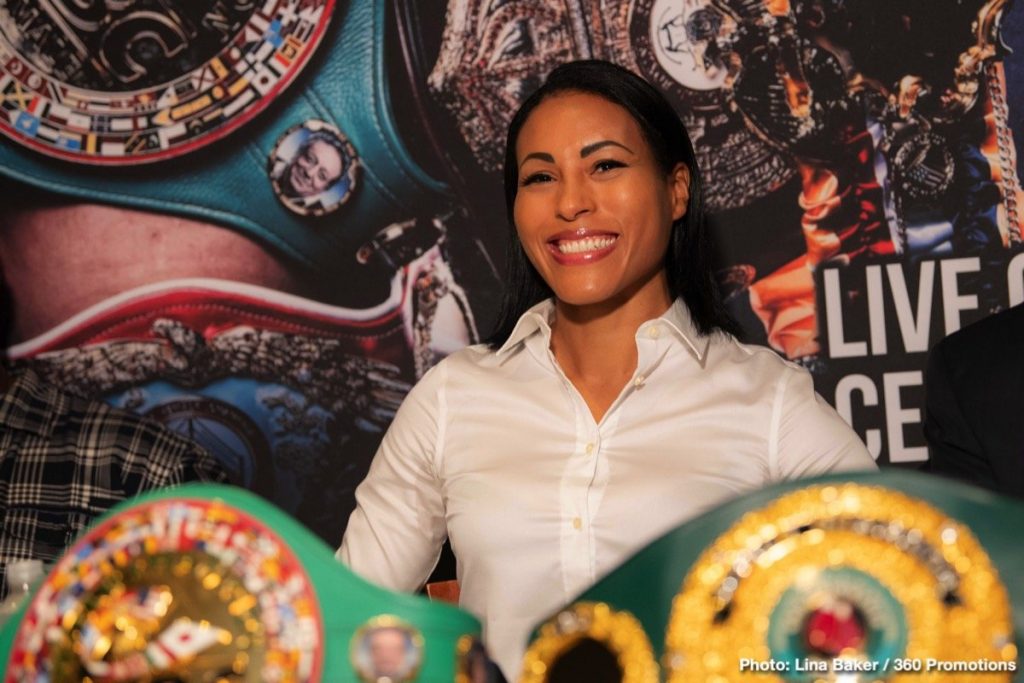 Undisputed Women’s Welterweight World Champion ‘The First Lady’ Cecilia Braekhus, (35-0, 9 KOs), is headed to the United States in May to commence training for her next fight in defense of all of her belts, (WBC, WBA, WBO, IBF, IBO and Ring Magazine). Based in Oslo, Norway, Braekhus has held all the world title belts in the welterweight division since September 2014.

“It seems like ‘undisputed’ has become a big talking point in women’s boxing in the United States recently. Claressa Shields just became the undisputed middleweight champion and I congratulate her for that extraordinary accomplishment,” said Braekhus.

“Claressa was very outspoken after her victory on Saturday about wanting to face me at a catchweight and Katie has also mentioned fighting me numerous times, also at a catchweight. Both of these would be massive events for boxing with two undisputed world champions facing each other and I’m very interested in both possibilities.”

In 2018 Braekhus was also linked to a potential boxing matchup with UFC Star Cris Cyborg.

“I met with Chris and her team a couple of times last year about the possibility of fighting in a boxing match and that is something that still interests me greatly and her as well.”

“Last year I fought three times in big fights, each one a different set of firsts for me, first woman on HBO, fighting for the first time in Russia and then finally headlining the last HBO card which had a female fight in the main event for the first time. I can’t wait to get started on my 2019 campaign and surpass last year.”

“For my entire career I’ve worked towards elevating women’s boxing inside and outside the ring and that is of the utmost importance to me this year as well.”

Braekhus is recognized as the International Ambassador for Women’s Boxing who fought outside the ring over a seven-year period to have professional boxing legalized in her native Norway which was previously banned for 33 years. Following the ban being lifted Braekhus fought four times in Norway starting in October 2016, all of which were massive events drawing over 10,000 fans and garnering record-breaking TV ratings.

‘The First Lady’ Cecilia Braekhus, (35-0, 9 KOs), is planning a big return to the ring following an extraordinary 2018 campaign filled with dominating victories inside the ring and a wealth of historical accolades outside.

In recent weeks numerous mentions of Braekhus in the worldwide media have been made for massive fights with unified lightweight world champion Katie Taylor and UFC Star Cris Cyborg.

“2018 was a very busy year and I’ve had a chance to relax and spend time with family and friends but now my immediate thoughts are to return to the ring,” said Braekhus. “In the past couple of weeks, I’ve seen many mentions of a massive fight with Katie Taylor and also a huge showdown with Cris Cyborg, both of which are very appealing to me.”

“I’ve been a fan of Katie’s since before she turned professional, we sparred together when she was an amateur and she is clearly one of the most talented female fighters in the world. With Cyborg we also are mutual admirers of our work and when we first met in December 2017 we had some discussions about having a boxing match.”

“A fight with Katie Taylor would be a massive event in either Ireland, Norway or New York City. For a fight with Cyborg, we both have fans on the West Coast so Las Vegas or Los Angeles would be perfect. These would be very big international events to elevate the sport of women’s boxing.”

“I’m back in training now in Norway and look forward to these specific opportunities and defending all of my belts in the fashion that my fans all over the world have become accustomed to. The most meaningful fights on the biggest stages is my goal for 2019.”

Kicking off 2018 on January 5, the Boxing Writers Association of America named Braekhus the recipient of their first-ever Women’s Fighter of the Year Award (2017). The award was presented by female boxing pioneer Christy Martin at the BWAA’s Annual Awards Dinner on May 11, 2018 In New York City.

On May 5, 2018, Braekhus was specifically chosen by HBO to fight in the first women’s bout aired on the network over their 45-year history of boxing telecasts. Defeating world ranked middleweight contender Kali Reis by unanimous decision at the StubHub Center in Carson, CA, the fight was telecast to an average of 904,000 viewers in the United States, the second highest viewership by the network for boxing in 2018.

As previously proclaimed by Ring Magazine, the Boxing Writers Association of America also named Braekhus the Women’s #1 Pound-for-Pound Fighter in the World on June 26, 2018 in the first poll taken by the organization for this honor. The belt presentation by Ring Magazine for their honor took place with Editor-in-Chief Doug Fischer on September 13, 2018 in Las Vegas.

Braekhus returned to the ring on July 21, 2018 fighting for the first time in Russia. Facing WBC Junior Middleweight World Champion Inna Sagaydakovskaya, Braekhus won a ten-round decision in front of over 25,000 spectators at Moscow’s’ Olympic Stadium in a fight telecast worldwide. The fight marked the eighth country Braekhus has fought in emphasizing her role as a true world champion.

Braekhus finished off her extraordinary 2018 campaign with a ten-round unanimous decision over Aleksandra Magdziak Lopes on December 8, 2018 defending all of her belts in dominant fashion. The bout served as the first time a women’s bout headlined on HBO Boxing.

After finishing out her boxing year in ‘Grand Style’, Braekhus travelled to Uganda on December 18, 2018 to open the ‘First Lady Primary School, a high school located just outside the capital city of Uganda, a project she had been working on for three years with ‘Bring Children From the Streets’, a Norwegian/Ugandan group headed by Richard Kiwanuka

Trained by the renowned Johnathon Banks, Braekhus has been the undisputed women’s welterweight world champion, holding all four major sanctioning body titles since September 2014. She is only one of five boxers to achieve this historical feat.