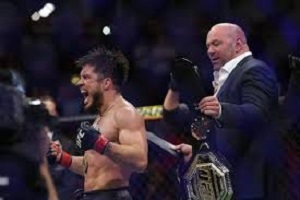 With wins over Demetrious Johnson, T.J. Dillashaw and Marlon Moraes, as well as becoming the UFC’s first ever simultaneous flyweight and bantamweight champion, Cejudo has cemented his legacy as one of the greatest pound-for-pound fighters in the world.

Following his epic come-from-behind win against Moraes, which ended via third-round technical knockout, ‘The Messenger’ called out a who’s who of bantamweights, including Dominick Cruz, Urijah Faber, and Cody Garbrandt.

Asked why he called out the likes of Cruz and Faber rather than a more deserving contender such as, say, Aljamain Sterling, Cejudo said he is on a ‘legend rampage’ and wants to become known as ‘a legend killer.’

“Because those are legends,” Cejudo said when explaining why he called out Cruz, Faber and Garbrandt in his UFC 238 post-fight interview (h/t Damon Martin of MMA Fighting). “I want big fights. I’m on a legend rampage. That’s what I want. I’m a legend killer. I want big fights.

Cejudo, an Olympic gold medallist, also teased of a move up to 145-pounds in hopes of becoming the promotion’s first-ever three-division champion. The top-four pound-for-pound talent believes he is the greatest combat sports athlete of all time, but UFC president Dana White isn’t sure sure about that.