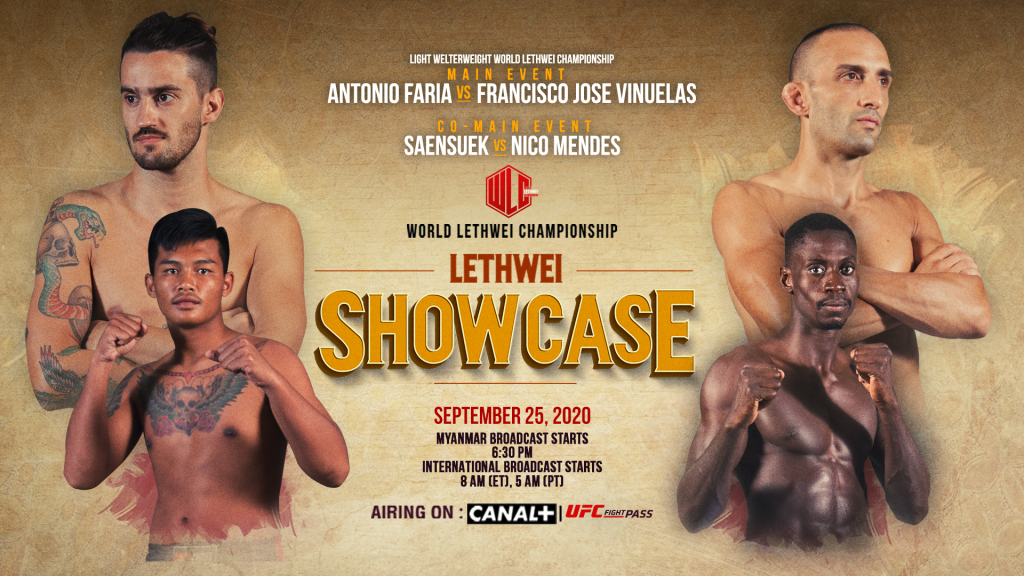 WLC: LETHWEI SHOWCASE will air on 25 September at 6.30 pm Myanmar time (5 am Pacific Time, 8 am Eastern Time, 1 pm London Time) and is available on UFC Fight Pass, Canal+, and other broadcast partners across 100 countries. Please check your local listings.

More information on WLC: LETHWEI SHOWCASE is available at www.facebook.com/worldlethwei

World Lethwei Championship chairman Zay Thiha stated, “Lethwei is poised to blossom as the next major combat sport on the global platform, providing combat sports fans the alternative it craves from boxing and mixed martial arts. This event is a showcase of the best that lethwei has to offer as a world-class sport.”

Antonio Faria has the most knockouts in World Lethwei Championship history and has never seen the judges’ scorecards in three outings. His bouts have been immortalized as some of the most exciting fights in lethwei history. At WLC: MIGHTY WARRIORS last February, he defeated Saw Htoo Aung to become the inaugural Light Welterweight World Lethwei Champion and will now defend his title for the first time.

Fransisco Vinuelas is a veteran of the Chinese mixed martial arts and kickboxing circuit. In his two-decade-long martial arts career, he has amassed more than 60 official fights across all disciplines. Vinuelas started out in Vale Tudo competitions as a teenager before moving on to focus on mixed martial arts and now looks to take the next step by becoming World Lethwei Champion.

Nico Mendes is a former IFMA Champion and Golden Fight Tournament Champion. The lanky Spaniard is effective in using his range and poses a stylistic matchup for all his opponents with his accurate straight punches and devastating knees.

Saensuek is a teenage muay thai prodigy training out of Venum Training Camp in Pattaya, Thailand. Despite his young age, he has amassed close to fifty fights, having competed in all the major competitions in Thailand.