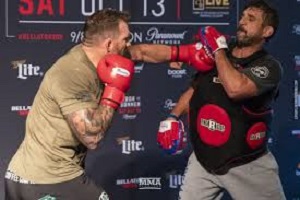 Ryan Bader has the opportunity to become the first fighter to ever hold multiple Bellator belts simultaneously on Jan. 26 when he faces Fedor Emelianenko for the vacant heavyweight title in Los Angeles. For his coach Jair Lourenco, it’s a chance to make history.

Lourenco, the leader of team Kimura in Natal, Brazil, moved to Arizona to coach Bader back in 2016, shortly after Bader’s win over Ilir Latifi. Since then, “Darth” has stopped Antonio Rogerio Nogueira in his final UFC bout and went on to defeat Phil Davis, Linton Vassell, Muhammed Lawal, and Matt Mitrione in Bellator, claiming the company’s 205-pound belt in the process and advancing to the heavyweight grand prix final.

”I didn’t foresee this future when I first got here,” Lourenco told MMA Fighting. “But after I got to know him as a person and as an athlete and I saw how hard he trains and takes care of himself, I saw that he could be a great champion. He’s really different because he loves to train. I believe he has everything it takes to continue on the winning track and get more great results because he works really hard.”

Lourenco has reached the top of the world as a coach before, training Renan Barao since his first MMA fights until he became the UFC bantamweight king with a 32-1 record. Lourenco says he can’t compare both achievements, but points out that Bader winning multiple titles in Bellator “will be great for my career.”

The first step in the heavyweight tournament came against former champion “King Mo” Lawal, a fight that only lasted 15 seconds. In the semifinal, his first time competing against a true heavyweight, Bader dominated Matt Mitrione for 15 minutes.

On the other side of the bracket, Emelianenko knocked out both Frank Mir and Chael Sonnen to earn a spot in the final.

Baders weighed 225 and 229 pounds for his previous heavyweight bouts, respectively, and Lourenco says Bader won’t get any heavier than 232 pounds for his title bout with Emelianenko since speed is one of the keys to victory.

”It’s going to be a fight between true champions,” Lourenco said. “They are both experienced fighters. Many people talks about Bader being younger and all that, like he’s in his 20’s, but he’s 35. The thing is, he’s an athlete and takes care of himself. They both hit hard and have high-level grappling. It’s going to be a high-level fight and, the longer it takes, the better for Bader because of his conditioning. He does well in five-round fights.

”We’re planning on putting pressure early on to force Fedor to work at a higher pace since the beginning,” he continued. “We will fight to submit him or knock him out, attacking the entire time, full pressure, for five rounds. I think that’s the path. You can’t let Fedor be too comfortable in the fight.”

Emelianenko faced Sonnen in the semifinal and scored the knockout in the first round, but the Oregon native had his moments in the fight. For Lourenco, that clash showed them “something,” even though Sonnen lost.

”I really expected Fedor to defeat Chael Sonnen by knockout,” Lourenco said. “If (Chael) had better timing in his striking (he could have won), (but) I think he got a bit nervous and respected Fedor too much inside the cage. Fedor must be respected, always, but you can’t respect him if you’re fighting him, you have to face him like he’s anybody else.”

Respecting your opponents abilities is one thing, Lourenco says, but giving him too much respect can play against you on fight night. According to the coach, that’s why they never refereed to Lawal as “King Mo” inside the gym leading up to their quarterfinal bout.

”Fedor is a fighter that everyone has looked up to at some point as coaches, looking for things to evolve, but you can’t respect him like Chael Sonnen did,” Lourenco said. “[Sonnen] was too nervous. That’s what I thought. Bader will feel good. This is a huge fight, that’s the moment he was hoping for, and he will be happy on fight night.”