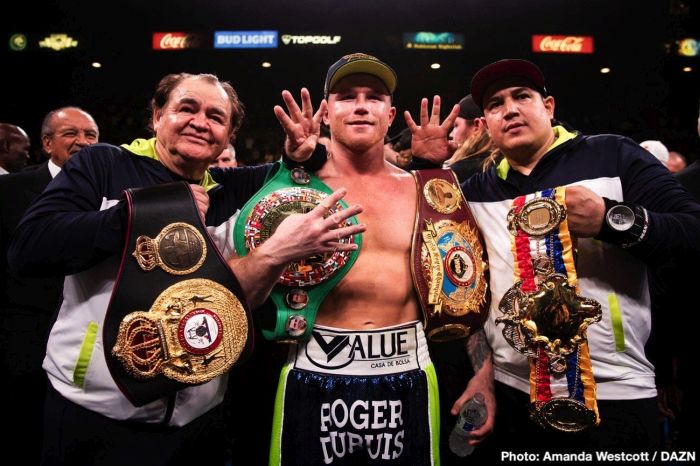 In short, the answer is yes, it is possible, and there are reports that talks for Canelo vs Murata are ongoing.

While boxing fans around the world would love to see the wildly popular Canelo fighting tough, proven warriors such as Jermall Charlo, Demetrius Andrade or Gennadiy Golovkin, there are underway talks for a possible Canelo vs Murata clash.

Even though Murata is considered by fans as the less lethal of the middleweight world champions, the 34-year-old Japanese star is undeniably a hugely popular magnet in the Land of the Rising Sun, being backed by a big marketing machinery, facts that make for an attractive stellar duel with the Mexican 4-division champion, pound-4-pound-lister.

Should Canelo (53-1-2, 36 KO’s), together with his Golden Boy promoter Oscar de la Hoya pick Ryota Murata (14-2, 12 KO’s) as the next opponent, the rumble would generate astronomical exposure in Japan and elsewhere, not to mention another ridiculously huge pay check for both boxers, which are main reasons why the two men are prizefighters, isn’t it?

Furthermore, the clash might even take place in Japan since Murata is not a popular name in the U.S. That would make it the first time that Canelo fights outside of the USA or Mexico.

Plus, talks have to deal with other major issues. One of them, TV rights. Who will broadcast? That needs to be sorted out.

Because, as widely known, Canelo, 29, signed a much-publicized USD 365 million deal for eleven fights with DAZN; while Murata, being a Top Rank fighter, is attached to competitor ESPN.

For one thing, the Canelo vs Murata fight could offer the perfect key for DAZN to expand even further in the profitable Japan market, a market where the popular platform can be accessed.

Would both DAZN and ESPN broadcast the event, or would somehow split? That is unknown. One thing is know, though: when there is big interest, married with a big budget, all things can be worked out just fine.

At the end, will the Mexican super star pick Ryota Murata, perhaps in May of this year?   Or will Canelo battle Charlo, Andrade or Triple G?    Time will tell.

But whoever Canelo chooses to fight, the event will be another big attention-grabber, likely one if the boxing highlights for 2020.