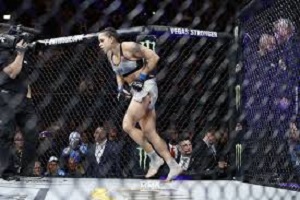 With a win over the nearly unbeatable Cris Cyborg at UFC 232, Amanda Nunes has risen up the ranks of the all-time greats in the eyes of many observers.

Nunes decimated Cyborg in Saturday’s co-main event at The Forum in Inglewood, Calif., needing just 51 seconds to hand Cyborg her first loss in over 13 years as well as her first-ever knockout loss, and add the champion’s featherweight title to her own collection of accolades. She entered the contest as the reigning women’s bantamweight champion and is now one of three fighters in UFC history (along with Conor McGregor and Daniel Cormier) to wear two belts simultaneously.

Add that all up and White believes there’s no denying Nunes is the greatest female fighter of all time.

It wasn’t just that Nunes won, it was the manner in which she dispatched Cyborg. Few fighters had ever dared to stand and bang with the Brazilian striking specialist, and for good reason. With the exception of Holly Holm, another decorated striker, all of Cyborg’s last 13 opponents (excluding one no contest) were finished via KO or TKO. Trading punches with her is considered ill-advised, to say the least.

But right from the start, Nunes came forward looking to land first and the sellout crowd was rocking from the first exchange to the last.

“The roof came off that place when that fight ended,” White said. “It was as exciting a fight as you’ll ever see and what makes it even bigger are the stakes. You have two of the baddest women fighting to see who the baddest is.

“Both world champions in two different weight classes and they come out and start bombing like that. There’s nothing more fun. You couldn’t ask for anything better and that type of a fight with what was at stake.”

White went on to say that he wasn’t surprised how the fight unfolded, though he didn’t expect it to reach it’s explosive finale so quickly, regardless of who ended up winning. He added that he’s not interested in doing a Nunes-Cyborg rematch right away, due to Nunes’s win being so “convincing.”

He’s bullish on Nunes’s potential star power, which is a sharp turnaround from a year ago when White buried Nunes for bowing out of a main event title fight at UFC 213 due to a bout of sinusitis. He described Nunes’s reasons for withdrawing as being “90 percent mental” and declared that Nunes would not headline again (she would go on to headline UFC 215 and UFC 224).

After UFC 232, White is certain that there’s nothing holding back Nunes from becoming a star just like some of the famous names she’s left in her wake.

“I said it for a long time now and leading up to this fight, this is the fight that had to happen. This fight had to happen,” White said. “It was the fight to make and this is the type of fight that builds legacies and you have find out who is the best in the world. We were able to do that tonight and it was an incredible fight and look at Amanda Nunes.

“You think Amanda Nunes isn’t going to be a star after this? I f*cking guarantee it. I promise you that. The place went crazy for her and I don’t know what’s next. Tuesday, we’ll be back in the office and we’ll have a meeting and we’ll figure out what’s next for her.”