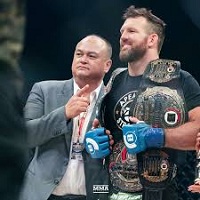 All of the above are things that could be said about either Bellator’s Ryan Bader or the UFC’s Daniel Cormier.

While Cormier no longer holds a light heavyweight title after relinquishing it in December, he became a dual-division champion last July with a knockout win over then-heavyweight king Stipe Miocic at UFC 226 (Cormier will rematch Miocic in August at UFC 241). Bader is currently in possession of two Bellator titles, having ripped through an eight-man Grand Prix tournament to add the heavyweight championship to the 205-pound championship he’s held since June 2017.

In the finals of that field, Bader needed just 35 seconds to punch out the legendary Fedor Emelianko, and even if one considers “The Last Emperor” to be well past his prime, it was still an impressive end to a tournament run in which Bader was not on the receiving end of a single significant strike. That performance had his coach Jair Lourenco positing that Bader could finish Cormier in a fight should the two ever be matched up.

During Bader’s time in the UFC, both he and Cormier were contenders in the light heavyweight division and at one point were supposed to meet at a Fight Night event in June 2015, but Cormier was moved to a bout with Anthony Johson at UFC 187 instead.

“I think Ryan’s done tremendous for himself. I’ve known Ryan since he was in college,” Cormier said on a recent episode of The MMA Hour. “He’s always been a hard worker and very committed to his family and everything else. I think he’s great. It is exciting to watch him gain a level of success that he never truly had gotten to in the UFC and the chances that he did get to get there, he had kind of faltered.

“With that being said, he just really dominated those guys and it was crazy because ‘King Mo,’ I watched him tech [Bader] in wrestling. Maybe scored like 10 takedowns. And [Bader] just truly, truly had to reset his mind to even compete against him knowing that his best skill is axed off. He can’t use it against a guy like Mo, so he went out there and knocked him out.

“It’s been nice, it’s been good,” Cormier continued. “It’s hard watching guys like Fedor get knocked out like that. He dominated (Matt) Mitrione, knocked out Mo. It’s been good to watch him do what he’s done.”

That said, as respectful as as he is of Bader’s achievements, Cormier drew the line at calling Bader a serious threat in a theoretical fight. Cormier sees himself as being on a different level in terms of mentality and physicality when it comes to competing inside the cage.

“But he wouldn’t be able to fight me,” Cormier said. “I like the guy, but it’s just different. It’s just a little bit of a different approach. Look, at the end of the day I’m just nasty ol’ boy. I learned that from Josh Barnett. You get in there, you rub your elbow in their face, you kind of run your hand over their mouth. I’m of the old school, like Josh Barnett. Hurt ‘em even when you’re not doing much and people don’t really like that. Even when I’m huggin’ ‘em, you know when it looks like I’m just huggin’ ‘em? I’m not just huggin’ ‘em. I’m really driving my knuckles into their body, even when I’m on top and I’ve got my elbow in the middle of the solar plexus, I’m pointing that elbow as deep in there as I can.

“There’s always pain, and I learned that when Josh Barnett put the pain on me when we fought in Strikeforce. It’s just a different type of mentality that most guys can’t match. You’ve got to be a dog if you’re going to beat Daniel Cormier — and I don’t know if he has that dog in him.”