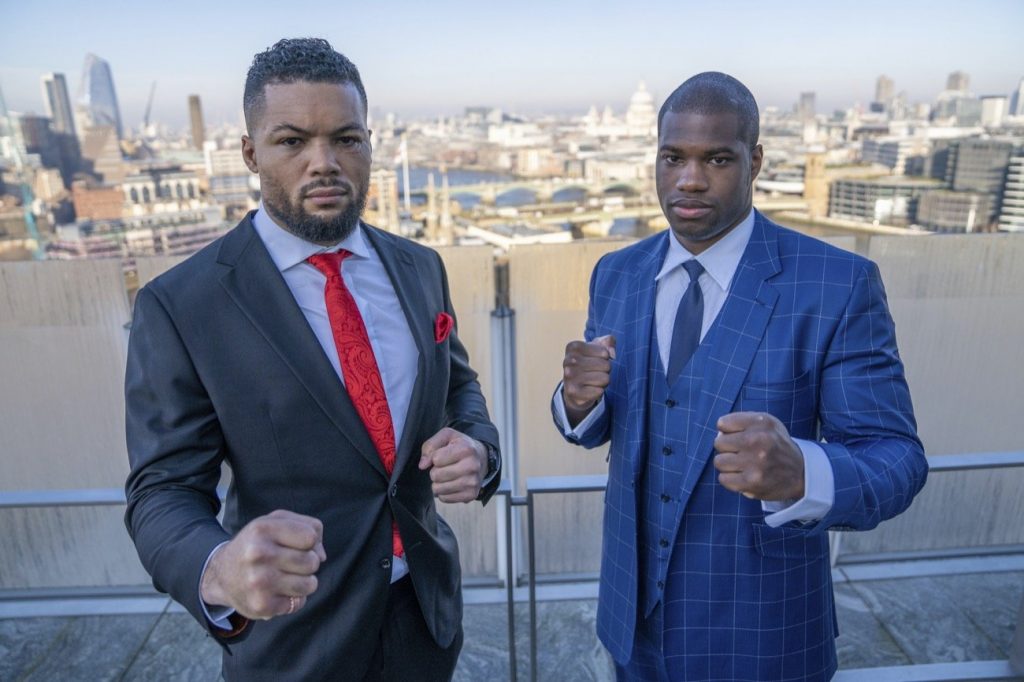 AN IMPRESSED Daniel Dubois has declared that Tyson Fury is “definitely the best right now” after The Gypsy King’s career best performance against Deontay Wilder on Saturday.

“Fury showed he’s the man and all the titles are back in Britain now. It’s great for British boxing!”

British fans allowed themselves to dream about a mouthwatering showdown between Tyson Fury and Anthony Joshua after The Gypsy King’s phenomenal performance at the weekend, but ‘Dynamite’ admits he’d understand if Wilder chose to seek out a third fight.

Asked if the Bronze Bomber should trigger the immediate rematch clause in his contract, Dubois said “Yeah… it’ll be another great payday for him!”

But ‘Dynamite’ was less convinced by Wilder’s chances of reversing his fortunes in a trilogy fight: “I think the same thing happens again, but i’m sure it’ll be another great event.”

Interviewed at the Peacock Gym, where training camp is well under way for his titanic April 11 tussle with former Olympian Joe Joyce, Dubois declined to say how he’d approach a fight with The Gypsy King.

That said, the most exciting prospect in world boxing conceded that “when I get the chance I have it in mind what i’m going to do… I’ll rip the belts off of whoever has them!”

With one huge Heavyweight bonanza now out of the way, all eyes turn to Daniel’s battle with the ‘Juggernaut’ on April 11 at the O2 Arena.

The massive BT Sport Box Office event is considered a must-see scrap between the two hottest prospects in Heavyweight boxing, with most pundits predicting the winner will be knocking on the door of a world title opportunity.

“Something really big is on the horizon for me. First, I have to deal with Joe. I’m not looking past him. This Joe fight could be for a world title!”

Promoter Frank Warren has referred to this as “the biggest domestic battle in years” and the sheer size of the event has ensured increased media attention for Dubois and his team.

Asked whether he understood why, ahead of Wilder vs Fury, many in the boxing world were questioning whether excessive media obligations could affect a fighters performance he simply said: “It’s all part of the game, you know?”

“It’s all talk, talk, talk. You’ve got to wait for the fight to see some fireworks going off!”

Level-headed Dubois has not allowed the pressure of a headline slot in one of the biggest Pay-Per-Views of the year go to his head and insists preparations for April 11 are going as well as can be expected.

“Eat, Sleep, Train, Repeat. That’s what we’re living like now. Nothing really interests me other than getting there and beating the hell out of him.”

Asked to sum up why fans should be excited for what is the biggest fight of his short career and the biggest domestic fight of 2020, ‘Dynamite’ said: “We’re on a collision course now, it’s all on the line.”

“It’s going to be a fight for the ages and I can’t wait for it!”

As the war of words heats up between domestic rivals Daniel Dubois and Joe Joyce, Tyson Fury has emerged as a powerful source of inspiration for ‘The Juggernaut’.

“Tyson Fury showed what can happen when you bully a bully” he said, “and I plan to do the same to Daniel!”

The two will square off on Queensberry Promotions huge ‘Seek and Destroy’ card on April 11th at the O2 arena, in a contest that Hall of Fame promoter Frank Warren has called “the biggest domestic battle in years”.

Dubois, coming off a terrifying one punch knockout of Japanese superstar Kyotaro Fujimoto, has emerged as an early favourite with the bookies but Joyce believes the hype surrounding ‘Dynamite’ is overblown.

“He has had it all his own way so far, but he knows what I’m all about.”

Joyce and Dubois famously sparred during their Team GB days, with Joe’s team claiming that they saw enough to not have to worry about the threat posed by their 22-year-old opponent.

Dubois has done some growing up since then, though, and is now 14-0 as a professional with 13 knockouts on his resume.

Joyce has proven to be no slouch in the pro game either with 10 wins, 9 KO’s and arguably the bigger scalps: fighters like Bryant Jennings, Alexander Ustinov and Bermane Stiverne have all fallen at the hands of ‘The Juggernaut’.

The upcoming fight between ‘Dynamite’ and ‘Juggernaut’ has, as such, been billed as a true ‘unstoppable force vs immovable object’ style tear-up and the build up so far has been fraught with a simmering hostility.

Both men are typically known for letting their actions in the ring do the talking but in the run-up to April 11th have been uncharacteristically vocal, fueled by what appears to be a genuine dislike for one another.

Joyce, however, doesn’t let the animosity phase him and insists he’ll conquer his heavyweight foe and claim the European, British and Commonwealth titles in crushing fashion.

“Daniel is talking about me only beating kids and downplaying my achievements. That’s up to him – no problem.”

“I just hope he’s got good people around him when I beat him because he’s going to be a broken boy on April 11th.”

With the boxing world predicting that the winner of this huge domestic battle will go on to fight for world honours, time will only tell if Joyce can “bully a bully”, move past ‘Dynamite’ and continue to emulate Tyson Fury as a world champion.

Tickets are now on sale via AXS.com and Ticketmaster.co.uk