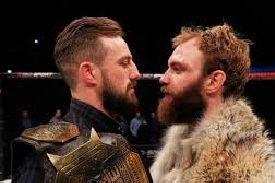 The second title fight for Cage Warriors 106 has been booked as Dean Trueman and Soren Bak will lock horns to settle who is the undisputed Cage Warriors featherweight champion.

The ‘Night of Champions’ card on June 26 is set to feature a main card boasting a complete cast of title fights. Trueman vs. Bak is the second title fight that has been announced for the Apollo date, following last week’s announcement that Jack Grant will face Jai Herbert for the vacant lightweight crown.

Trueman and Bak were supposed to meet for the featherweight title at Cage Warriors 103 in Copenhagen, Denmark after “True Viking” vacated the 155-pound strap, but Trueman had to withdraw from the clash due to injury. Bak went on to claim the interim featherweight title against short-notice replacement Morgan Charriere.

Trueman (10-4-0) is coming off his featherweight tournament final victory over Aiden Lee which saw him clinch the divisional strap. His relentless showing against Lewis Monarch at Cage Warriors 98 booked his place in the final. An eight-year veteran as professional, Trueman has competed six times under the Cage Warriors banner, compiling a record of 4-2. He is currently on a three-fight win streak.

Bak (13-1-0) was one of Cage Warriors’ breakout stars in 2018. After three straight wins with the promotion, he claimed a the vacant lightweight title when he clashed with one of the promotion’s biggest names, Paddy Pimblett, in Liverpool at Cage Warriors 96. Bak became the first two-division champion in the history of the organization since Conor McGregor when he edged out Charriere in front of his home crowd.