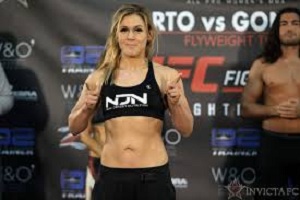 DeAnna Bennett and Karina Rodriguez are set to throw down again, this time with an Invicta title shot on the line.

Officials announced Tuesday that Bennett (10-4-1) and Rodriguez (7-3) will fight in the flyweight main event of Invicta FC 35, which is set to take place at Memorial Hall in Kansas City, Kansas, on June 7. This will be a rematch of their Invicta FC 28 encounter last March that Bennett won by split decision.

The headlining bout will also serve as the finals of the four-woman flyweight contender tournament that began in February at Invicta FC 34. On that card, Bennett and Rodriguez defeated Miranda Maverick and Milana Dudieva respectively to advance past the tournament semifinals.

The winner will go on to face current Invicta flyweight champion Vanessa Porto.

In the co-main event, unbeaten atomweight Alesha Zappitella (5-0) faces Octagon veteran Viviane Pereira (13-3). The 24-year-old Zappitella has defeated both of her Invicta foes so far, including one-time Invicta atomweight title challenger Amber Brown in her most recent fight last December.

Pereira, who compiled a 2-2 record in four UFC appearances, fell short in her Invicta debut last November, dropping a unanimous decision to Mizuki Inoue. The 25-year-old Brazilian has lost her last three fights.

See the updated lineup below: