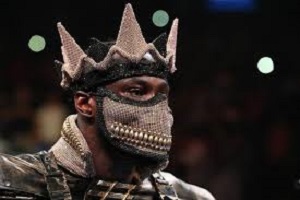 Deontay Wilder is coming off of a devastating knockout win over Dominic Breazeale this past Saturday on Showtime, and appeared Inside PBC Boxing to talk about that win, his death threat comments, and whether or not he plans to fight Anthony Joshua or Tyson Fury any time soon.

On what he’s up to after Saturday’s win

“I’m actually at my home gym. I’m getting as far away from the gym as possible at this point in time. I’m just relaxing. There’s no place like home. Just chillin’.”

On whether he thought Breazeale would go in one

“I said before, I’d be surprised if it goes past three rounds. If it would’ve went past three, then something would’ve definitely been wrong. I felt Dominic Breazeale is definitely not an elite fighter, he’s not on my level, at least. He is tough and he can hold his own in there with the best, but when you’re talking about a Deontay Wilder, I’m just on a whole other level. I came on a mission, and with the bad blood we had — it only intensifies what I wanted to do in that fight, and I did everything that night.”

On the KO punch

“When I hit him, I did a special spin move to indicate that it was over. Like I said before, I said I was gonna A-B-A-C-A-B-B him. That’s a Mortal Kombat move, and I did just that. Everything that I do, I speak it into existence to let people know that it’s real, to let them know that when you speak, your words are very powerful. I display that each and every time. If you go back in the past with me saying certain things that people didn’t take notice of, you can see to this day that things have transpired and happened just like I said it. I tell people I have gold at the tip of my tongue.”

On the spin move

“That’s just something that my energy made me feel like I’m doing. I had to move with the groove, baby.”“I don’t regret nothing I said, my actions spoke louder than my words. It’s boxing. It’s a fight. If the people can’t handle boxing, I think you should find another sport.”

On saying he wanted to kill Dominic Breazeale

“Y’all know who you’re talking to. Come on, baby. I don’t say things that I don’t mean. I’m very serious about what I say, I’m very serious about what I do. I’m passionate about what I say, and I’m passionate about what I do, or I wouldn’t be the realest champ in the business. Me and Dominic Breazeale had something on the outside of the ring. He threatened my family. When you threaten my family, things come behind that, consequences of your actions. I threatened him, as well. I protected my family like I’ve always known to do. No one’s gonna come to my backyard, my city, my state and threaten me after I put you on a card. It won’t happen. I don’t regret nothing I said, my actions spoke louder than my words. It’s boxing. It’s a fight. If the people can’t handle boxing, I think you should find another sport. I’m the most exciting heavyweight in the business and you get what you want, you get knockouts, great knockouts, and I’m gonna speak my piece, and that’s the end of that. Thank you.”

On negative reactions to his comments

“When I say things, people get butthurt about it. There’s so many sensitive, butthurt peoples in the world. One thing I can’t stand is a sensitive, butthurt type of person. Words hurt, of course it does, but I don’t care who thinks anything about it. I don’t care about what no one thinks, nor what they say or how I feel. Everybody turned in just to see me do what I was said I was gonna do. You’ll criticize a man, but you tune in — ‘I just wanna see if he’s gonna do it.’ Man, get outta here, especially in the times we’re living in. I do me, you guys do you and enjoy the show.”

On who’s next and when Anthony Joshua will happen

On who he wants to fight next

“I want the big fights, man. I’m on a roll. I’ve been doing so much, I’ve been grinding so hard. People wanna know, out of the two which one I think will be more realistic for the fight to happen. To be honest, the way I see it, I think the Fury fight will be a little more easier to make than the Joshua fight. But who knows, man? With time comes patience. I just want people to have patience and allow us to get these things in order as far as different teams, my team and his team, all teams, all parties involved, and let us make the great fights that you wanna see. Let us make the biggest fights in history happen. Please give us that time. I’ll be back soon. One thing people wanna see when they come to see heavyweight fights is they wanna see knockouts, and I do that for you.”