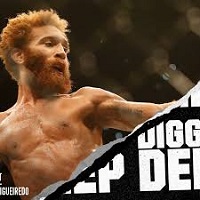 There is a strong theme with every recent UFC card, especially on the prelims. It would be a large volume of Dana White’s Contender Series alums. Of the seven contests on the prelims of UFC Norfolk – a total of 14 competitors — seven of the participants come directly from DWCS. That’s half of the participants. It could have been higher had both Steven Peterson and Mike Davis not pulled out with injuries.. That’s not even counting Alex Munoz who was replaced by another DWCS alum. I’ve also been keeping a tab of every featured prelim of 2020. Every single featured prelim has been scheduled to have a DWCS alum up to the day before the event, weight issues being the only thing keeping the final results for the year from being unanimous. This card is no different as Kyler Phillips represents the DWCS alum this time around. Sorry if you’re getting tired of me beating the DWCS drum, but the UFC’s reliance on undercard fighters coming out of the program is alarming.

Watch ‘UFC ON ESPN+ 27- #UFCNorfolk – ‘Benavidez vs. Figueiredo’Stream all the fights broadcast LIVE — don’t miss a single second of face-punching action! Plus, you get access to the best of the UFC Archives & more!SIGN UP NOW!

Though it seems like a lifetime ago, it was just over two years ago that Tybura headlined a Fight Night against Fabricio Werdum, going the distance with the former champion. Including that contest, Tybura has a single win in his last five fights. A lot of it appears to boil down to a loss of confidence in the big Pole as he hasn’t been the same since being brutally KO’d by Derrick Lewis, a fight he would have won had he been able to make it through the final round.

Tybura proved in his winning streak into his headlining role that there’s a lot to like about him. He doesn’t have earth-shattering power, but he’s a versatile enough striker to be dangerous, his head kick KO of Viktor Pesta being a brilliant example of that. He also has one of the better gas tanks at heavyweight and has proven to be a more than capable wrestler and grappler. It all comes back to where his head space is. If Tybura continues to resemble the tentative fighter who is reluctant to engage, he should consider getting out of the sport entirely as he’s setting himself up for major injury.

Spivak surprised many when he bounced back from a quick KO loss to Walt Harris with a dominant performance over Tai Tuivasa. Spivak identified where he could expose Tuivasa and did so, scoring takedown after takedown by catching kicks and utilizing the clinch before finding an arm-triangle choke about midway through the second. Spivak has a good-sized frame, is strong in the clinch, and is already one of the better submission grapplers in the division. However, he isn’t a strong athlete, shows poor striking defense, and his chin provides more questions than answers.

Strictly on trajectory, Spivac is an easy choice. He’s young enough that he should continue improving for the next several years and appears to have a good head on his shoulders. However, he doesn’t have the tool set to expose where Tybura has been struggling. In fact, Tybura should be able to negate what Spivac does well. If Tybura can’t secure a win here, he’s done as a viable UFC heavyweight. Fortunately for him, Spivak is tailor-made for him to get back on the right track. Tybura via decision