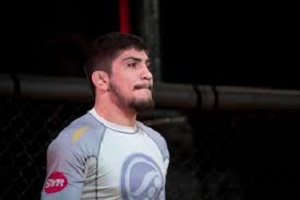 The promotion announced the news on Thursday following an initial report from MMAFighting’sAriel Helwani.

Danis, 24, signed for Bellator in March 2017. The BJJ black belt appeared in the MMA limelight when Conor McGregor brought him in as a training partner to work on his jiu-jitsu ahead of his rematch with Nate Diaz at UFC 202. It has been confirmed that Danis will prepare for the upcoming fight at SBG Ireland, the gym McGregor trains out of.

Walker (2-4) is currently on a three-fight losing streak and like Danis, he will be making his Bellator debut on the night. His last fight ended in a submission loss, and all four of his defeats have been by stoppage.

Bellator 198 takes place on April 28th at the Allstate Arena in Rosemont, Illinois. A heavyweight Grand Prix quarterfinal between Fedor Emelianenko vs. Frank Mir will headline the card.