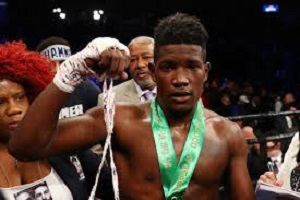 Props arguably have to be given to Erickson Lubin, who remains unbowed and feisty in the face of Jermell Charlo — on social media, anyway — and seems to be angling for a rematch with the Texas twin.

You will recall that “little” Charlo and Lubin collided in October, at Barclays Center, in a young gun vs young gun scrap. The 29-0 Charlo exited with his 0 intact, as he dropped and stopped the Florida-based Lubin (then 19-0) with stunning speed and clarity.

Lubin got back in the ring for another swing this past Saturday in Texas, and got back in the win column scoring a TD-4 win over journeyman Silverio Ortiz on a PBC on FOX card topped by a Josesito Lopez vs Miguel Cruz matchup.

And on Tuesday, Lubin was in sparring mode, posting this:

Charlo, not one to run from an online beef, countered:

I seen you last weekend you ain’t have shit to say. I had your momma crying for a rematch when I knocked you out. You better chill you fucking bum. But I guess you don’t remember. You sure you not the one on coke?

Again, the argument can be made that Lubin is showing some XL cojones, poking the stick at the lion that has already roared in his face. Might we see him work himself into a rematch, down the line?