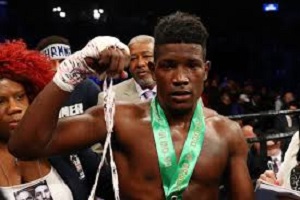 Former ESPN “Prospect of the Year” Erickson Lubin, out of action since a crushing knockout loss to Jermell Charlo last October, is due back in the ring in two weeks. He faces Mexico’s Oscar Cortez at super welterweight on the untelevised undercard of the FOX PBC tripleheader headlined by Josesito Lopez vs. Miguel Cruz.

“The Hammer” (18-1, 13 KO), riding high off of a knockout of heavy-hitting Jorge Cota, lasted 2:41 against Charlo before ducking into a right hand that left all of his limbs trying to escape in different directions. Lubin had just turned 22, so there’s still time to recover.

Maybe take it a little slower this time, though.

Cortez (26-3, 14 KO) has a BoxRec page full of losing records and three knockout losses. The only notable thing about him is that he fought at 140 in 2014, spent two years out of the ring, and then returned at middleweight two Decembers ago.

The televised portion of the card features the aforementioned Lopez-Cruz fight, Anthony Dirrell vs. Abie Han, and Jorge Lara vs. Claudio Marrero.