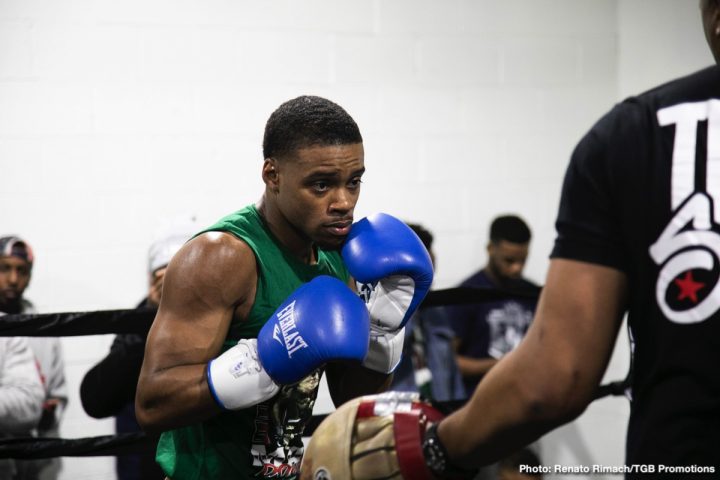 Errol Spence Jr. says he’d be willing to face middleweight champion Saul Canelo Alvarez if he’s interested in fighting him next. Spence Jr. (25-0, 21 KOs) is looking to get a big name after his one-sided victory over Mikey Garcia on March 16, and a match with IBF/WBA/WBC middleweight champion Canelo Alvarez (52-1-2, 35 KOs) would be something he would be interested in. The boxing world is highly interested in seeing Canelo and Spence fight each other if the match can get negotiated, and a weight agreed on.

Canelo’s promoter Oscar De La Hoya is VERY interested in matching him against Spence next if he can get him to agree to take the fight. Spence could make a lot of money in this fight. There’s talk of Spence getting $20 million, but it’s going to likely need to be increased. Spence says that’s a starting offer for him.

The Golden Boy star Canelo is coming off of a 12 round unanimous decision win over IBF middleweight champion Daniel Jacobs on may 4 on DAZN. Canelo won the fight by a 12 round unanimous decision. The match attracted a great deal of attention worldwide. Canelo will next be fighting in September. Former middleweight champion Gennady Golovkin is an option for Canelo, but it will depend on how he looks in his fight next month against Steve Rolls on June 8. If GGG loses that fight or looks poor, then Canelo will need Spence to take the fight. Canelo can’t be fighting GGG if he’s a shot fighter, and unable to shine or beat a mediocre guy like Rolls.

“I am letting you know that we love the fight as well and I’ve always said that Errol Spence is one of the most talented fighters out there,”said De La Hoya said to ESPN.com in letting them know how much interest he has in matching Alvarez against Errol as soon as possible. “There’s no reason why Spence can’t move up to middleweight if Mikey Garcia could go up (from lightweight) to welterweight to fight Spence,” De La Hoya said.

Given the many years Canelo has been benefiting from catch-weight handicaps since 2013, it would make sense for him and Golden Boy to extend the opportunity to Spence to have a small weight handicap for the good of boxing. Would be the end of the world if Canelo met Spence at a catch-weight of 156.5 pounds? Just a small handicap for Spence would make it worthwhile for both fighters to make this fight happen. Asking Spence to come up two entire weight classes to fight a guy that already holds a world title at 168 is asking a bit much. Canelo is not only the unified IBF/WBA/WBC middleweight champion, but he also holds the WBA ‘regular’ 168-pound title. Canelo likely blows up in weight close to 180 pounds for his fights at middleweight.

“And if Spence fights Canelo, it will be the most money Errol Spence will ever make,” De La Hoya said. “I would love to start the ball rolling. Let’s do it. We just want to get Canelo the best fights and the toughest challenges out there,” De La Hoya said.

Well, if De La Hoya wants to get the ball rolling, he needs to come with the offers to Spence. The $20 million that De La Hoya is said to have initially offered Spence is a good starting offer, but it sounds like Errol is interested in a little more than that. He said it himself the $20 million is “a good starting offer.” If De La Canelo can sweeten the offer, he might be able to get Spence to sign his name to a contract to to fight Canelo in September. There’s nothing wrong with Canelo and GGG fighting each other in September, but a lot of boxing fans would like to see a new name inserted into the equation for Canelo to fight in September. Golovkin will still be there for Canelo to fight in December of this year or next year in May. There are plenty of Steve Rolls level fighters that GGG can fight while he waits for Canelo to get done with Spence.

A rehydration limit might be needed by Spence’s side to ensure that Canelo doesn’t balloon up after the weigh-in. Golden Boy had a rehydration clause in Canelo’s fight with Daniel Jacobs that worked in his favor, but that was against a guy that was bigger than him. Spence, 5’9″, isn’t as heavy as Canelo, so you can argue that he would be the one that would need a rehydration clause to make sure the fight is fair.