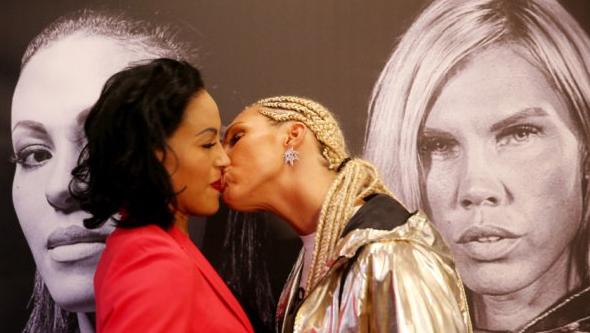 BOXING face-offs are all about mind games. Fighters try to look intimidating, they talk trash, and they get up in each other’s grills all in the name of mind games.

Swedish professional boxer Mikaela Laurén took the theatrics to a whole other place during a press conference on Monday when she stood toe-to-toe with undefeated champion Cecilia Braekhus.

As cameras clicked away, Lauren approached Braekhus, stared deeply into her eyes and planted a kiss on her lips. At first, Braekhus reacted in horror and half slapped, half pushed Laurén away. But Braekhus soon started laughing at the absurdity of it all.

“I haven’t got that in a while,” Braekhus joked as Lauren exited stage left.

Thirty-six-year-old welterweight Braekhus (31-0) is the pound-for-pound queen of Norwegian boxing and currently holds the female WBA, WBC, IBF, and WBO titles. She will fight 41-year-old Laurén (29-4) in Norway on Oct. 21.

Lauren has form in this department, in 2013 she planted a kiss on her opponent Christina Hammer of Kazakhstan ahead of their WBF World Middleweight fight. The difference is that Hammer appeared to kinda like it.