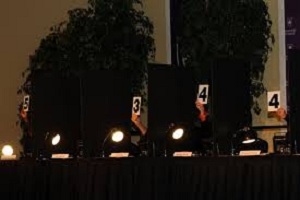 How are UFC rankings decided? At first I thought that there must be some kind of algorithm based on wins, losses, type of win, who beat who, etc. When I watched fans debate female rankings on forums years ago, this is what they tried to argue about. Then I heard that UFC rankings are currently decided by a voting panel made up of media members. I’m not quite sure what to think of this. I wonder if I should worry about ticking anybody off, or my fashionable appearance, or general actions. People can be funny about things.

Rankings didn’t really mean much to me at first; I was just so happy to finally be signed to the UFC, after fifteen years of fighting. Having a UFC contract is my dream come true! After the Ultimate Fighter: Season 26, I found myself ranked in the top ten. Cool! That’s when I started paying attention to rankings. I felt I deserved high placement in the division because I beat two people in the TUF house dominantly, and then got a title shot. After my win over Barb Honchak in July 2018, I found myself at number 4. I was so thrilled, and started bragging to my family.

A high ranking means is being closer to a title shot, which means more career opportunities — potentially fame and fortune. Only fighters ranked in the top five tend to get title shots.

Then came the ordeal with Nicco missing weight and getting stripped of the title. Overnight I dropped from four to seven. I found this out online, when somebody tweeted and linked me in, saying, “Who did Roxy and Sijara piss off by supporting Nicco, to have them drop in rankings?” I thought, “Wait, what? I dropped? Why DID I drop in rank?” I had no idea.

If we go on the “journalists deciding” methodology, then they apparently decided to move me down without me having fought and lost. That kind of sucks. I didn’t do anything! Does the UFC staff, matchmakers, or Dana White have any say? It’s left me very confused. I feel like it would be nice to have an explanation. But, I suppose that it’s not as important in MMA, because MMA is not treated 100% like a professional sport. It’s a mix of sports and entertainment.

I assume matchmakers make matches based on fight styles and entertainment value, while adhering to some kind of ladder of value called ‘rankings’ because it makes the match-ups more interesting. Whatever fights you see in the cage or ring, somebody put a lot of thought into them; how the fighters’ styles would clash or complement each other. Would fans look forward to the fight? Are the fighters close enough in ranking and skill to face each other? Matchmaking ain’t easy.

Clearly, Rankings play a role in how matches are made, which is why I started caring about how they are chosen. Some un-ranked person wouldn’t get a title shot, right? However, Valentina Shevchenko fought an un-ranked Priscila Cachoeira – making her UFC debut – in order to make her flyweight debut, and ended up fighting for the title off just that win. Almost certainly, that was based on her previous victories and fame. As a flyweight fighter working her way up, I’m unhappy about that kind of treatment. But, if I were a UFC executive, with decision-making power, I might have done the same thing. Valentina brings previously known entertainment value and pizzazz.

That kind of decision making is not necessarily wrong. If nobody wants to see Fighter XYZ fight, then they won’t pay money to watch and the company will lose money by using resources to put on that fight. If all the fans want to see Conor McGregor, they’ll pay and the company makes money. I understand it’s a balance.

As fighters, we are working to craft a skill and eventually ‘win,’ but some wins are more entertaining than others for various reasons: violence and blood have usually been number one. Rarity and uniqueness of style count for something too — like Ryan Hall’s rolling leg locks, Anthony Pettis running sideways across the cage to knock down Benson Henderson with a flying kick, or Ronda Rousey getting an arm bar whenever she felt like it.

Fighters must accept that their value comes not only from their skill, but their overall entertainment. Many women take off their shirts and hold boxing gloves over their boobs to emphasize sexuality. Back in the day, I used to despise it, but now I understand the value of a girl trying to get eyes on her to create fans. I cosplay as video game and anime characters, which made me fans from the geeky crowd.

A picture of my new skinny jeans got almost as many ‘likes’ on Instagram as me holding my hand up, victorious in a fight. I was shocked. Now that the skill level of female fighters has risen – compared to what it used to be in the past – if a girl is just pretty and can’t fight, that won’t further their career. It’s up to her to back it up. The same goes for men flaunting their visual bad-assery. You gotta fight tough AND look tough.

I would like more clarity about how rankings are decided, but in the meantime, I’ll work to strengthen both my skill, and my pizzazz. And hopefully climb back up the rankings as a result.