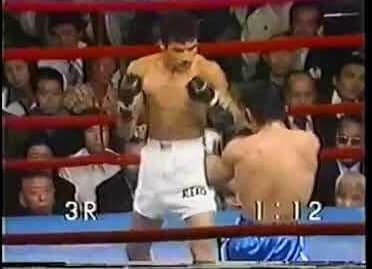 Alexis counter-attacked the strong, dangerous Kobayashi, rocking him down to canvas earlier in the round, then ending him with a brutal left hook to the liver that sent the Nippon warrior down to the floor again.

Absolutely in pain, the brave Royal Kobayashi tried to beat the count of referee Carlos Padilla, but couldn’t make it on his feet on time, losing by KO at the 2:26 mark in round 5.

However, the crushing defeat, the next year, tough warrior, Kobayashi won the WBC super featherweight belt

The night was a great win for “The Explosive Thin Man,” a formidable charismatic fighter who went on to fight for another 20 years, claiming world titles in two more weight classes.

Alexis is a member of Boxing’s Hall of Fame.

A beloved wonderful man and a real gentleman inside and outside the ring, Alexis Arguello is always in the heart of boxing fans.