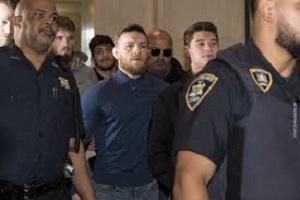 So, let’s see … I take a week off, then come back to find Conor McGregor in court, controversy over interim titles, plus an under-the-rader-ish UFC on FOX card that has some sneaky good fights.

Sounds like nothing changed while I was gone. Let’s get on with another edition of Fightweets.

Conor McGregor, Khabib Nurmagomedov, and the rest of the lightweight division

@RuckerYeah: Is Conor-Khabib inevitable, and what does that mean for the rest of the division?

A bunch of questions like these came in after Conor McGregor copped a plea bargain Thursday in a New York City courtroom, presumably clearing the way for his long-awaited return to the Octagon.

There’s a moral argument to be made that McGregor should not be rewarded for his actions in Brooklyn following a media day on April 5, which wreaked abject havoc on the UFC 223 fight card and did material damage to the careers of Michael Chiesa and Ray Borg.

Then there’s the divisional argument that McGregor should not get a title shot, that he has not fought in an MMA bout in two years, that the UFC lightweight division has moved on and that the winner of Saturday’s Eddie Alvarez vs. Dustin Poirier bout should be the next in line for champion Khabib Nurmagomedov. (Those arguing this point seem to have forgotten there’s a guy namedTony Ferguson who does, in fact, still exist.)

A bit north of $4 billion, of course, was WME/Endeavor’s purchase price for the UFC in 2016, and in case you haven’t noticed, the company isn’t exactly tearing things up at the box office. Daniel Cormier’s win over Stipe Miocic at UFC 226 appears to have done 380,000 pay-per-view buys, for a bout which easily would have done twice that number and probably more if you have a heavyweight vs. light heavyweight champion superfight back in the day. Even then, UFC 226 marks the company’s biggest PPV number thus far this year.

Only one fight on the horizon is going to do blockbuster business, and it’s not Khabib vs. Poirier orAlvarez. McGregor’s return after a two-year absence, in a hyped rivalry matchup with Nurmagomedov, by all means should break the UFC’s pay-per-view buyrate record.

Those considerations will win out over whether a fighter who committed McGregor’s actionsshould be rewarded with an immediate title shot. Money has trumped such matters for as long as there’s been such a thing as the fight business — witness how promoters rang every last dollar out of Mike Tyson during his myriad troubles — and will continue to do so, especially knowing those making the biggest stink about things will tune in anwyay. Right or wrong, barring unforeseen circumstances, get ready for Khabib vs. Conor.

The interim emperor has no clothes

@SigepWesleyG: How does @ColbyCovMMA & @TonyFergusonXT get their interim titles taken away w/o even fighting?? As a fan, I think I should get a refund for the PPV I bought for those title fights!!! So Dave, drop some knowledge on us #Fightweets

Well, our man Alexander K. Lee was on the scene for UFC on FOX 30 media day in Calgary, and judging by the tone of the responses he got from fighters when asked about the recent developments with UFC interim titles, it sounds like the rank-and-file are now hip to the fact the interim belts mean even less than we all thought they did in the first place. (Likewise, you can just ask Brian Ortega, who turned down the opportunity to fight for an interim belt when Max Holloway fell out of their fight.)

There was something about this week’s events which seemed to signify interim belts have jumped the shark once and for all. Colby Covington fought Rafael dos Anjos for an interim title at UFC 224on the flimiest of rationales: Welterweight champ Tyron Woodley, who had fought four times in 12 months, wasn’t quite ready to return from shoulder surgery. Covington won, cementing his clear-cut No. 1 contender status with his sixth straight win. And now, simply because UFC wants Woodley to headline UFC 228, Darren Till, who missed weight for his bout with Stephen Thompson, gets the title shot instead. Between this and Tony Ferguson’s interim belt vanishing despite a nine-fight win streak, I wouldn’t be surprised to see more fighters go Ortega’s route and just say no to interim titles.

@igobykurty: If Joanna is to lose this weekend do you think she’ll move to 125?

I’m kind of surprised she hasn’t moved there already. I understand the argument for keepingJoanna Jedrzejczyk at strawweight — she’s has only lost to one woman, ever, so why move out of the division? The problem, of course, is that woman is current champion Rose Namajunas, and Jedrzejczyk has lost to Namajunas twice, which makes for a long path back to a title shot.

Jedrzejczyk faces one of the most underrated competitors on the entire roster in Calgary in Tecia Torres. There’s a solid chance Jedrzejczyk won’t look good, even if she wins. Putting all these factors together and adding in trouble she’s had making 115 pounds, yes, it’s surprising she hasn’t gone up to flyweight already. Perhaps Saturday will nudge her in that direction.

@ShannonDee20: Should Jose Aldo move up win or lose?

“Why hasn’t this person changed weight classes already?” seems a common theme this weekend. In the case of former longtime featherweight champion Jose Aldo, weight cuts have been wearing him down for years. Aldo’s bout with Jeremy Stephens marks his first non-title fight since 2009, which would seem an indication that maybe trying to get down to 145 is finally catching up to him. Given there’s no clamor to see him in another title fight anytime soon, maybe it’s time to make that jump once and for all, even if he looks like the Jose Aldo of old Saturday. Then again, Aldo alsoseems to have one eye on the exit, so maybe none of this matters?

@Dr_Omoplata: Is DC ducking Gustafsson? He appeared to be eyeing title fights with Rua, Glover and Corey Anderson. All of which appear to be easy fights for him. Not a good look for DC.

Um, what? You do know that Cormier defeated Gustafsson at UFC 192, right? And that Gusty has fought exactly twice in the nearly three years since? And that Gustafsson just dropped out of a fight? I wish Gustafsson all the best in getting past his injuries woes, but if I’m Cormier, and I really do intend on following through on my intention of retiring by age 40 next year, and I have two belts I could defend, then yeah, I wouldn’t seek out a fight with Gustafsson, who may or may not make it to fight night either. Let Gustafsson see how he fares against the streaking Anthony Smith first, and then we’ll talk another title shot.

@billypumpkin24: What do you think of Renato Moicano?

Let’s go with “a tough, durable dude who hasn’t gotten nearly the respect he deserves for his accomplishments so far.” Moicano is 4-1 in the UFC, his only loss was to Ortega, who submitted Moicano late in a fight Moicano was winning (and he’s not the first person to lose that way to Ortega), and he responded with a one-sided win over Calvin Kattar at UFC 223, just as Kattar was starting to build momentum. Moicano meets popular veteran Cub Swanson at UFC 227 with an opportunity to distinguish himself as something beyond just another face on the card, and it will be interesting to see how he does in this spotlight.

@ItsKevinwithanL: Should Dominick Cruz immediately get the winner of Dillashaw/Garbrandt 2, or should he have to fight an up and comer first? (Aljamain, Moraes)

That’s a tough one. On one hand, the former UFC and WEC bantamweight champion’s record speaks for itself: His UFC 207 title loss to Cody Garbrandt was his first loss since 2007, and his first ever at bantamweight. He’s 22-2 overall. On the other, well, even if he meets his goal of returning to action before the years out, that UFC 207 bout was his last fight, and by the time he’s back, he’ll be coming off two years since his last bout.

The counterpoint, of course, is that Cruz fought just once between Dec. 2011 and Jan. 2016, and that latter bout was his split decision win over T.J. Dillashaw to regain the UFC bantamweight belt.

So Cruz, who is still only 33, has already proven he can bounce back from long layoffs and resume competing at a world-class level. But we’re talking about another two years of injury and rehab on top of a history of injuries.

I’m guessing this one comes down to factors out of Cruz’s control at the moment. What if Garbrandt regains the belt from Dillashaw at Staples Center next weekend? That pretty much begs for a trilogy fight, especially considering Garbrandt was given his title rematch coming off a knockout loss of the title. What if Dillashaw wins next week, and also Demetrious Johnson again dispatches of Henry Cejudo? That could make the timing finally right on a bout between Dillashaw and Johnson.

If Cruz is frozen out of the title picture for now, maybe you match him up with Raphael Assuncao, who just keeps winning. Maybe you match him with the surging Marlon Moraes and see how he fares against someone elite who won’t wander right into a knockout. (Aljamain Sterling doesn’t belong in this conversation until he puts together a string of impressive wins against top-flight foes, something he’s yet to accomplish.)

Of course, I’ve been trying to make sense of things from a divisional perspective. The UFC could very well just decide Cruz is the biggest name available and give him the next shot either way. Which basically means I’ve just written a lot of words when I could have just said “We’ll see.”