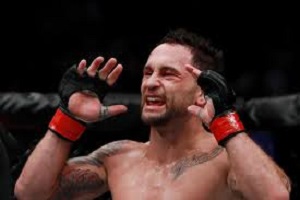 Not everybody is happy with Frankie Edgar’s title shot against reigning featherweight champion Max Holloway at UFC 240 — least of all Alexander Volkanovski.

Edgar’s upcoming championship bout against Holloway will mark ‘The Answer’s’ third crack at the UFC featherweight title, and Volkanovski thinks the UFC is only offering it to him out of sympathy.

Edgar, however, feels he’s deserving of the matchup. Speaking to MMA Fighting’s Chuck Mindenhall in a recent interview, the 37-year-old stated his case for a title shot and assured Volkanovski, who is on a whopping seventeen-fight win streak, his time will soon come.

“I think it should matter,” Edgar says of his UFC resume. “You hear Dana [White] and UFC brass, they like people that step up, they like guys that are willing to put it all on the line, and I think my whole career I’ve done that. And I think that’s why I got rewarded.

“I think so, based on my past history with the UFC, and then the landscape of the way went down with me and Holloway, I think it just makes sense. I don’t want to take anything away from Alex, he’s a stud fighter. He’s won a bunch of fights in a row. He’s going to get his time. I was him not too long ago, and he’s going to get his time. I know he’s probably a little upset, because I’ve been there before. But his time will come.”

Edgar last fought in April of 2018, when he earned a unanimous decision over Cub Swanson in the UFC Fight Night 128 co-main event. Prior to that, the former UFC lightweight champ was knocked out by Brian Ortega at UFC 222. Edgar, who has been competing in the UFC for over twelve years, has fought just three times in the last three years.

As for Volkanovski, the streaking featherweight contender is currently in hospital due to a type of blood infection, per ESPN’s Ariel Helwani. The Australian fought last Saturday at UFC 237, where he cruised to a unanimous decision over ex-featherweight king Jose Aldo in the co-main event.

UFC 240, which is expected to feature Holloway vs. Edgar as the main event, takes place later this year, July 27 at Rogers Place in Edmonton, Alberta, Canada