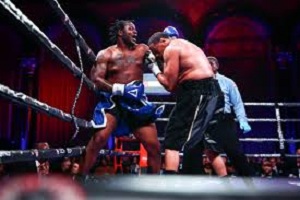 Heavyweight prospects Jermaine Franklin and Otto Wallin fought on the Shields-Hammer card on Showtime in April, and will get second chances to impress in separate bouts on the July 12 edition of ShoBox: The New Generation.

Franklin (18-0, 13 KO) is a 25-year-old from Saginaw, Michigan, who defeated Rydell Booker via unanimous decision on April 13. There were some things to like and some potential worries in Franklin’s performance that night. At 6’2” with a 77-inch reach, he’s not a big heavyweight by modern standards, but he has some skills.

Franklin himself says he feels he could have done better, and that he will show more in July.

“In my Showtime debut earlier this year, I felt I could have put on a better show but I won and that’s most important,” Franklin said. “Winning this fight is an important step toward my dreams of fighting for a heavyweight championship.

“This fight also is a chance for the fans to see me more focused and prepared. Jerry Forrest has been around the game for a while and he brings a lot of skills to the ring. I will be ready for him.”

“This is a long time coming for me,” said Forrest. “My record and my potential are definitely worthy to fight in the main event on national television. This is where I should be. I’m very comfortable and I’m not at all overwhelmed. I’ve fought in the Nationals and big tournaments and I’m not afraid of the spotlight.

“Franklin throws a lot of punches and tries to bully you out. He’s not super accurate from what I see. He’s a heavyweight who will try to outwork you. I see him as a very similar fighter to Andy Ruiz. My training is going great, I haven’t been out of shape in two years. I’ve been in the gym grinding and doing it old school.”

Sweden’s Wallin (20-0, 13 KO) didn’t really get a chance to show anything in April, as his fight with Nick Kisner was stopped after the first round due to a cut caused by an accidental headbutt, resulting in a no-contest. The 6’5”, 28-year-old southpaw will hopefully get more of an opportunity this time around.

“My U.S. debut did not go the way I had hoped and I didn’t get a chance to show off my skills,” said Wallin. “I’m really looking forward to going out there again getting a chance to show a lot more.

“This is a fight I need to win if I want to go somewhere. I need to win and I need to look good doing it. I need to be sharp at all times and not take anything for granted. This is a sport where everything can change in the blink of an eye.”

The 40-year-old Flores (34-4-1, 21 KO) has been a pro since 2003, and floated around the edges of contention at cruiserweight for quite a while. He eventually got something of a big fight shot in 2010, losing to Danny Green in Australia, then he lost to Beibut Shumenov and Tony Bellew in 2015 and 2016, respectively.

Most recently, Flores was stopped in four by Trevor Bryan last August. This is pretty much a last chance for the veteran fighter, who has also worked as an analyst for many televised fights over the years.

“Not only is this a winnable fight for me, I am 100 percent winning this,” said Flores. “I’m working with Angel Heredia and Ibn Cason and world class heavyweight Kubrat Pulev. Working with this team is perfect for getting my strength and conditioning up for this fight, and sparring with one of the top guys in the world in Pulev is making me very sharp.

“I know Wallin is undefeated and has a good amateur style. He’s tall and has good boxing ability. I know he’s got some talent and is a young up and coming guy. He’ll be trying to make a name for himself off of my name, so I’ll be ready for that.”