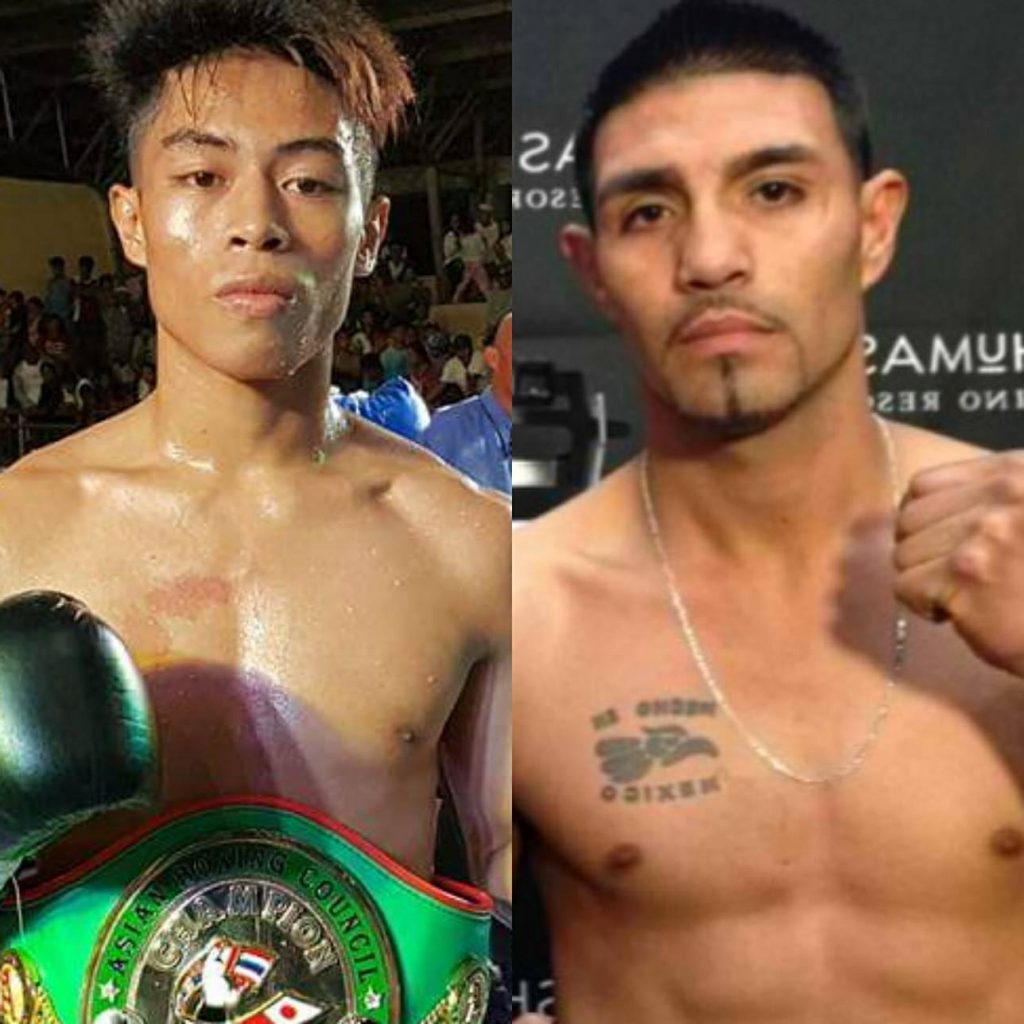 Reymart Gaballo (left) and Ernesto Guerrero will fight on Nov. 15 in Hawaii.


UNDEFEATED Reymart “GenSan Assassin” Gaballo from General Santos City but now based in Miami, Florida, will finally make his debut in the US on November 15.
This was announced by Gaballo’s manager John Ray Manangquil though his brother Jim Claude “JC” Manangquil, chief executive officer of the Sanman Promotions.
Gaballo is facing Mexican Ernesto “Monito” Guerrero (27W-21L-0D, 19 KOs) on Nov. 15 at the Hawaii Events Center in Honolulu, Hawaii in the main event of the “Fight Night at the Island” boxing promotion of Filipino international boxing promoter Gabriel “Bebot” Elorde Jr.
“This is a great opportunity for Gaballo to look good in his US debut,” said Mananquil.
The 21-year old Gaballo has an unblemished record of 16 straight wins with 14 knockouts.
Gaballo thanked Sanman Promotions and Elorde for giving him a chance to be showing his talent infront of the boxing fans including the thousands of Filipinos in Hawaii.
“Nasasabik ako at handa akong ipakilala ang sarili ko sa US (I am very excited and I’m ready to introduce myself in the US,” said Gaballo.
Gaballo has been training at the gym of Cuban Coach Moro Fernandez in Miami since December.
In his previous outing, Gaballo stopped Jerson Luzarito by a 2nd round technical knockout last Dec. 4 at the Robinson’s Mall in Gensan.
Gaballo captured the vacant WBC Asian Boxing Council super bantamweight title by stopping Manot Comput of Thailand in the first round only last Sept. 10, 2016 in Tupi, South Cotabato.
Gaballo will be the third boxer from Sanman Boxing Gym to be making his US debut.
Harmonito Dela Torre (19W-0L, 12 KOs) and Romero “Ruthless” Duno (15W-1L-0D, 13KOs) both successfully made their US debuts. And both of them have won already their two separate fights in the US.
Mananquil is confident that Gaballlo can follow the footsteps of Duno and Dela Torre.
“Gaballo is also a great talent and he will be the next star from the Philippines,” said Manangquil, who visited Gaballo recently in Miami.
The Manangquil brothers will also be going to Hawaii to give their moral support to Gaballo.
Meanwhile, the 28-year old Guerrero scored five straight wins before he dropped his previous assignment by a unanimous decision to Ruben Villa last Sept. 22 at the Doubletree Hotel in Ontario.
Guerrero started his 5-0 winning streak by stopping Alfredo Montano via a 3rd round TKO last December 2016 in Cananea. He followed it up with back-to-back victories against Jesus Talla by a 1st round TKO on March 17 and then a UD on April 1.
Guerrero then knocked out Arcadio Salcido in the 1st round on May 13 in Agua Prieta. His last victory was a 3rd round TKO on Carlos Medina on May 27 in Cananea.