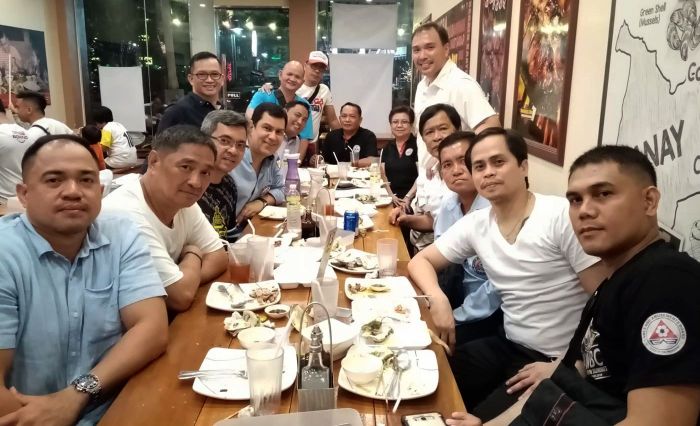 CEBU CITY, Philippines — In a casual, yet meaningful gathering, GAB Chairman Baham Mitra exchanged views with Boxing Ring Officials of Central Visayas and GAB Cebu Officers during his participation in the exciting boxing action held over the weekend here in the Queen City of the South, Cebu.

The constructive open dialogue between the GAB (Games and Amusement Board) chairman and the boxing officials in Cebu covered a wide range off issues, with six points out.

Subjects that grabbed the attendant’s interest included the encouragement from the GAB Chairman for unity and brotherhood among all ring officials in Central Visayas and the country for the betterment of boxing in general.

Fees for boxing officials was another point of interest. The GAB leader mentioned that there was an agreement already reached, in which Manila promoter Gabriel Bebot Elorde a suggestion about officials fees, an initiative that accepted. Therefore, an order from the Chairman is regarding the increase of fees for all officials.

“About this matter of fees, an agreement to raise fees for boxing ring officials was done during a consultation with APPBRO (Association of Philippines Professional Boxing Ring Officials) and boxing promoters at GAB’s head office which was led by Gabriel “Bebot” Elorde and Dante Almario.

“My leadership at GAB has always been consultative and participatory regarding all issues, including of fees for boxing ring officials,” said the man in charge of the Philippines Games and Amusement Board,” added the chairman, a former Governor and Congressman.

Mitra also motivated every man and woman of boxing in the Visayas – stakeholders – to take an active part in the VISPROBA (Visaya Professional Boxing Association) deliberations.

“The participation of all involved is necessary the fair and proper ranking of boxers within the Visayas region,” according to the chairman.

In fact, a training seminar for judges and referees was already carried out last November of 2018 at PICC Manila during the WBC Asia Summit sponsored by the GAB.

Yet, Mitra is interested in more training for boxing officials, and he would like those to be under the guidance of the “Dean of Filipino Boxing Officials,” the hugely appreciated veteran man of boxing Bruce MacTavish.

“Let’s have McTavish do his craft, and it will be informative, refreshing and fun for all,” thinks the chairman.

The training seminar for judges and referees is in the planning stages, with Mitra wanting it to push forward as he sees training as a way of improving even further the already excellent quality of Filipino boxing ring officials.

In addition, the Chairman talked about the significance of the Oath Talking for the leadership of the 2019 Officers for Professional Boxing Ring Officials of Central Visayas.

Earlier that Friday, Mitra administered the Oath-Talking to the new officials trusted with the blessed mission of working for the benefit and betterment of fellow ring officials as well as the sport of promoters at in the Central Visayas region.

Finally, the point of a “GAB Summit for all Contact Sports” was mentioned by Mitra, who is also a WBC International Secretary.

“The summit is not definite yet, but it is planned to be held at PICC in Manila,” shared the GAB boss with the attendants.

Officials who accepted the kind invitation to meet, talk and have dinner the GAB Chairman were:

Also being part of the positive meeting by invitation of Mitra were boxing reporter Antonio Antogop Jr. and Cebu promoter Jerome Calatrava of Omega Boxing Promotions.

In a nice token, the Chairman treated the ring officials and GAB Cebu officers to a native Filipino dinner in Parkmall, where the friendly talk about boxing wanted to go on forever.

At the end of the evening, the Professional Ring Officials of Central Visayas (PBO-CV) heartfully thanked GAB Chairman Baham Mitra for gracing and officiating their very important 2019 Oath-Taking Ceremony and for the fruitful meeting that undoubtedly tightens wonderful ties of the Filipino boxing family as well as guides forward the sport of pro boxing in Central Visayas.

.
The author Carlos Costa is a Panama boxing reporter living in the Philippines. Carlos can be reached at carlos512@hotmail.com and / 09184538152.