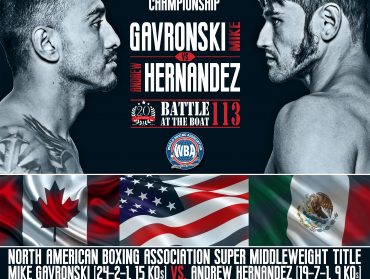 Riding a four-fight unbeaten streak and two months removed from scoring the most notable win of his career, super middleweight prospect Mike “Imagine Me” Gavronski (24-2-1, 15 KOs) will step back into the ring in search of his first title belt on Saturday night at the Emerald Queen Casino in Tacoma, Washington, squaring off with Arizona’s Andrew Hernandez (19-7-1, 9 KOs) for the vacant WBA-NABA 168 lbs. championship. The title bout will serve as the main event of Brain Halquist Productions’ 113th edition of the long-running ‘Battle at the Boat’ series, heading up what promises to be an entertaining six bout card.

Gavronski, a Tacoma native, has been on a steady climb up the ranks over the past fourteen months, working his way into his current position with wins over formerly unbeaten Australian prospect Jake Carr (TKO 6), tough Ghanaian Thomas Awimbono (UD 10), crafty southpaw Quinton Rankin (UD 10), and most recently stopping the well-respected Brian Vera in the sixth round this past September. He is currently ranked #5 by the NABA, #2 by the NABF, and #5 by the IBF-USBA.

The recent string of wins came on the heels of an unsuccessful bid for the WBA-NABA USA super middleweight title in November of 2015, when he lost to cagey journeyman Dashon Johnson, a fighter whom he had beaten one year prior. Gavronski rebounded from that loss putting together his most impressive series of performances and doing so against durable opposition.

“Mike has been fighting tough,” said promoter Brian Halquist. “I always tell athletes it’s easy to win, but a real champion is defined with how you come back from a loss. He came back from that title loss to Dashon and never looked back. He’s worked hard and gotten serious about his training and his career. You can see him getting better in every fight. Now he’s positioned himself into an NABA title fight and he’s done everything he needed to do to give himself the best opportunity to go as far as he can in his career.”

After almost eight years as a pro, the only other loss on the popular local fighter’s ledger was a 2014 decision defeat to Tureano Johnson in a try for the WBC Continental Americas middleweight title. Over the past year he and his team have done well in maneuvering him into another title opportunity, with his dominant win over Vera—a former contender who’d faced some of the better fighters in and around the middleweight divisions in recent years—doing much to buoy his position.

“He really proved something when he beat Brian Vera,” said Halquist. “That was a huge win for him. If you look at Vera’s pedigree, he’s fought world champions and beat some solid guys. We knew he was on the downside of his career, but when you have a world class athlete like that, those guys are the riskiest fights because they have so much experience. So, for Mike to win that fight was big. Vera was a gate-keeper and a big step up for Mike and he won by knockout. That was big for him…Now if he wins this title he’s definitely within a few fights of a world title shot.”

Hernandez, meanwhile, has assembled a noteworthy resume in his seven-year career, winning the WBC United States (USNBC) middleweight championship in May of 2016 with a decision victory over Arif Magomedov, and taking the WBA-NABA US 160 lbs. title this past February, defeating Sijuoala Ade Shabazz by decision. In his twenty-seven pro fights, the Phoenix resident has been in the ring with a number of top fighters, including current contender Jesse Hart—who just recently challenged Gilberto Ramirez for the WBO super middleweight title—losing to Hart in the third round a year ago, and unbeaten prospect Caleb Plant, dropping a ten round decision to him in September.

“Andrew Hernandez is going to be Mike’s toughest test to date,” said Halquist. “He’s been the NABA champion before and somebody like Hernandez, right now he’s really fighting for his career. That’s always scary. He’s got quality wins and his losses are against quality people. He’s as tough as they get…It’s going to be one hell of a fight and as good a fight as you’ll see on any Shobox or ESPN show.”

Gavronski and Hernandez will meet in the ten round headline bout, with promoter Brian Halquist and Matchmaker Andy Nance lining up an intriguing five-fight undercard, featuring young fighters from around the Northwest region.

In one of two semi-main events, former Tacoma amateur stand-out Andre Keys (4-1, 1 KO) will square off with Portland’s Sean Gee (4-6) in a five round contest. Keys is on a three fight win streak, with his most recent victory coming against Andres Reyes in a close September match-up. Gee is hoping to add his second consecutive victory after scoring his first win in four fights last January, defeating Jacob Szilasi by split decision. The fight is an interesting contrast in styles, with Keys being the better boxer and Gee being more prone to brawling. Both fighters tend to stand in the pocket and trade when pushed, though, making for a strong possibility this could turn into an exciting fight. They will meet in the welterweight division.

Unbeaten Jr. middleweight banger Steven Villalobos (6-0, 5 KOs), of Burlington, Washington, will look to add his seventh consecutive win in the other semi-main event, taking on Yakima’s Eduardo Torres (1-1) in a scheduled five round bout. Villalobos, a fighter with an aggressive, crowd-pleasing style, has scored all but one of his six wins inside the distance, with his only decision win coming against durable Montana journeyman Daniel Gonzalez in July. Villalobos last stepped into the ring on October 28th, knocking out Cory Vom Baur in the first round. Torres last fought in February, defeating Bryson Vasques by decision.

In a rematch of a closely contested fight that took place earlier this year, Tacoma’s Cameron Sevilla-Rivera (7-5-2, 5 KOs) will face-off with Kian Heidari (1-0-1), of Vancouver, BC, in a four round light heavyweight tilt. Heidari surprised Sevilla-Rivera this past March, and most fight fans in attendance at the EQC showroom, trading on even terms with the veteran of twelve pro fights in what was Heidari’s pro debut, holding the local fighter to a split draw. Since their first encounter, both fighters have fought once. Heidari defeated Ken Huber by majority decision in September, while Sevilla-Rivera lost to Rudy Puga via sixth round KO in April.

Rounding out the remainder of the card will be two four round fights. In a welterweight clash, Seattle’s Jorge Linares (1-0, 1 KO) will take on pro debuting Austin Springer; and in a 140 lbs. contest, Auburn, Washington’s Niko McFarland (0-4-1) will meet Keith Wolf, who is fighting as a pro for the first time.

Doors to the I-5 showroom at the Emerald Queen Casino will open at 6 p.m. with the first fight set to start at 7 p.m. Tickets to ‘Battle at the Boat 113’ can be purchased at the EQC box office or at all Ticketmaster locations. For more information visit www.halquistproductions.com or the Battle at the Boat Facebook page.