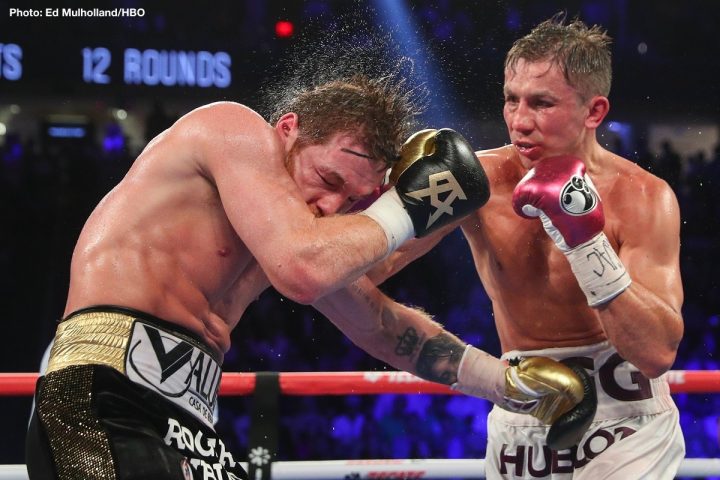 By Dan Ambrose: Matchroom promoter Eddie Hearn reportedly been in talks with Gennady Golovkin’s promoter Tom Loeffler to setup a mouth-watering fight between GGG and WBA Super World super middleweight Callum Smith (25-0, 18 KOs) for early 2019 in May in Anfield in Liverpool, England. Anfield is a large football stadium that seats 54,000+ fans, and Smith-GGG would very likely fill it to the brim. Golovkin vs. Smith could be a big money maker in 2019 for both fighters.

Fighting in Liverpool against the highly popular 6’3″ Callum Smith may put GGG in the same situation he’s been in with his two fights against Saul Canelo Alvarez taking place in Las Vegas, Nevada. The general consensus from the boxing public is Golovkin was robbed in both fights against Canelo in Las Vegas. If Golovkin agrees to fight Callum in his hometown of Liverpool, England in front of 54,000+ pro-Smith fans, it’s going to be equally tough for GGG to win a fight.

Golovkin should remember the last time he fought in England in 2016 when he defended his middleweight titles against British fighter Kell Brook in London. Golovkin appeared to dominate four out of the five rounds before knocking out Brook in the 5th, and yet one of the judges had the fight scored for Kell by the scores 39-37, 38-38 and 38-38. The way the fight was being scored, Golovkin had to score a knockout for him to get the victory. It’s fortunate for GGG that he was able to stop Brook in the 5th round with his pressure and power punching.

– This would be a way for the 36-year-old Golovkin to show that he has more courage than Saul Canelo Alvarez, who is facing a perceived much weaker champion at 168 in taking on WBA ‘regular’ super middleweight champion Rocky Fielding (27-1, 15 KOs) on December 15 on DAZN at Madison Square Garden in New York. Canelo’s promoters at Golden Boy Promotions chose to put him in with Fielding, 31, rather than an arguably stronger fighter in the 168 lb weight class like Callum Smith, who is coming off of a big 7th round knockout win on September 28 over George Groves in the World Boxing Super Series 168 lb tournament at the King Abdullah Sports City, Jeddah, Saudi Arabia. Smith captured the Muhammad Ali trophy in winning the WBSS tournament with his knockout win over Groves.

– GGG winning a second division world title against Smith. The boxing public will be able to see how Golovkin is willing to step it up against the fighter that is now considered to be the #1 guy at super middleweight in Callum, which would be a major boost to GGG’s career. The boxing public will of course be more impressed with Golovkin fighting Smith than they will of Canelo choosing to face the perceived weakest of the 168 lb champions in Rocky Fielding. Grabbing a second division world title would be great for Golovkin. It would give him a new division to campaign at, and look for interesting fights. The middleweight division has Canelo, but not much else as far as big money fights.

– Fighting Callum Smith will increase Golovkin’s star power if he beats him, which will will help make his trilogy fight against Canelo come about faster. There will be great pressure to bear put on Canelo if GGG beats a talented fighter like Callum Smith. If Golden Boy doesn’t want to have Canelo fight Golovkin a third time due to the wear and tear that the Kazakhstan fighter is putting on him, it’ll be hard for them to avoid it if he defeats Smith.

– Possibility of losing: There’s a real chance that Golovkin will lose to Smith if he takes fight due to how much bigger the 6’3″ British fighter is than he is. For all intents and purposes, Smith is a light heavyweight, who has been able to use his youth to melt down to fight in a weight class far below his normal weight. Smith hasn’t gotten older to where it’s negatively impacting his performances in draining down to make weight at 168 to fight at super middleweight. Not too long from now, Smith will no longer be able to make the 168 lb weight limit without weakening himself in the process. When that happens, he’ll need to fight guys his own size at light heavyweight and possibly even cruiserweight. But for now, Smith, 28, is still capable of making weight at super middleweight to fight against smaller guys than himself. For Golovkin, he wouldn’t just be fighting someone one weight class bigger than him. He would be basically fighting a guy three weight classes bigger than him in Smith, considering that GGG is small enough to fight in the 154 lb weight division. Erislandy Lara, Jarrett Hurd, Jaime Munguia and Jermell Charlo, all junior middleweights, rehydrate into the low 170s for their fights in the 154 lb weight class. Golovkin is little more than a junior middleweight, who chooses to fight at middleweight. It would be really asking a lot of Golovkin to fight someone three weight classes bigger than him in Callum.

– Punishment taken: Golovkin will take a lot of heavy shots against Smith, and that could hurt his ability to defeat Canelo in their potential third fight in September 2019. With Smith’s huge height and reach, Golovkin would be forced to walk through a lot of big shots for him to get close enough to him to land his power shots. Smith likes to throw a lot of hard left hooks that he winds up on against his shorter opponents. Golovkin would be in the line of fire the entire night in facing the taller Smith, and he end up getting hit with a lot of hard left hooks in the course of the fight.

– Size disadvantage: Smith would have almost a six inch height advantage over Golovin. That would be significant. Golovkin has never fought anyone that much bigger than him in the pro ranks. Although Golovkin has sparred taller fighters from time to time, he obviously hasn’t sparred with a lot of them with the kind of size and power that Smith possesses.

– Not much to gain from fighting Smith: This is the biggest problem for Golovkin. He wouldn’t gain much from the U.S boxing fans in fighting Callum Smith because the British isn’t well known yet with the casual fans, and it’s unclear whether he ever will be.

The 6’3″ Smith would be enjoying a 4 1/2″ inch height advantage on top of a likely 15 lb weight advantage as well. Smith rehydrates into the mid-180s for his fights at super middleweight compared to Golovkin’s 170 lbs for his fights at middleweight. This would be like Smith facing light heavyweight Artur Beterbiev. While Smith would likely have his moments in the fight, Beterbiev would get to him sooner or later to chop him down.

Golovkin’s trainer Abel Sanchez recently mentioned the idea of GGG facing Callum Smith in 2019, but he didn’t seem to be in a hurry for that fight to take place. The fight that Sanchez is more interested for Golovkin’s next bout is against WBA ‘regular’ middleweight champion Rob Brant, who is coming off of a 12 round unanimous decision victory over Ryota Murata. However, there’s no real money for Golovkin to make fighting the little known Brant, as he doesn’t have a large fan base. Golovkin would be the challenge against Brant, and it’s unlikely that the fight would attract much interest from the U.S boxing public. Fighting Callum Smith would be a bigger deal for Golovkin due to the huge amount of British boxing fans that would tune in to see it. This would almost surely be shown on Sky Box Office PPV in the UK, which means that there would be good money for Golovkin to share from the British market.

The fight that Golovkin wants most of all is a trilogy match against Canelo Alvarez, but the Mexican fighter and his promoters at Golden Boy Promotions aren’t interested in making that fight yet. They want Canelo and GGG to get a couple of more fights under their belts before they make the trilogy fight possibly in September 2019 in Las Vegas, Nevada. Golovkin has lost his bargaining power with Canelo and Golovkin by virtue of his loss to him in the rematch last September, which means that he’s going to need to accept whatever purse split they offer. It also means Golovkin will likely need to go back to Las Vegas and fight at the same venue that his previous two fights against Canelo took place at the T-Mobile Arena. Golovkin will need to make changes in his fighting style if he wants to finally beat Canelo. That means no jabbing and no backing up. It’s going to need to be pure power shots from Golovkin, since it’s unlikely that he’ll be able to win a decision against the popular Mexican star with him fighting in Las Vegas.