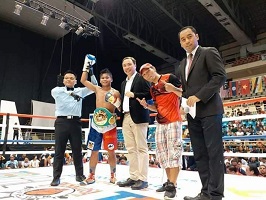 Despite passing all the necessary medical and pertinent qualifications criteria to fight boxer Ryan Burnett for the WBC International Super Bantamweight title scheduled for May 17 in Belfast, Northern Ireland, the Games and Amusements Board (GAB) Dioscoro Bautista still wants to deny Filipino boxer Jelbirt Gomera the chance of a shot at the prestigious WBC belt.
Gomera is still hoping that GAB’s Dioscoro Bautista will allow him to fight Burnett.

According to Gomera’s camp, the WBC chairperson for medical William Boodhoo has already cleared the Filipino fighter Jelbirt Gomera after the 30-day weigh for the important fight.   Also, WBC president Mauricio Sulaiman has sanctioned the good fight and Sulaiman has given important promotion company MTK GLOBAL (whose president is former WBC vice president Bob Yalen), the go signal for the Belfast Fight scheduled to be broadcast live worldwide on ESPN+.

In addition, the fight matchmaker Art Monis has released a statement confirming that boxer Jelbirt Gmera is the Philippine # 1 ranked boxer in featherweight’s Philippine rating.    Plus, Gomera has won two (2) of his last (3) three fights.   In addition, the well-trained Gomera has complied with all the rules and requirements for Filipino boxers on fighting abroad.
Shockingly, Gomera was denied the chance of a lifetime by GAB Boxing Chief Discoro Bautista.
Gomera’s camp is now appealing the sad, unfair, unreasonable decision.   The Filipino Boxing community questions why.

In fac,t international Boxing analysts deem it to be a good and reasonable match-up between Ryan Burnett coming from a bad back injury and the well-fit Gomera.     The Boxing Community knows that In his last fight against Nonito Donaire, Burnett left the ring in a stretcher due to pain an injury.    In contrast, the FIlipino has been fit all along.     The advantage in fittnes seem to be in Gomera’s favor as nobody knows how is Burnett’s back after his injury.  That is an advange for Gomera.

Undoubtedly, the fight was a good chance for aFilipino boxer as Jelbirt Gomera to win a green-and-gold international WBC title in Europe.
Gomera has already fought for titles and won.

Earlier in his boxing career, Jelbirt Gomera won his OPBF title via 5th round TKO against former Olympian fighter for the Featherweight Oriental Pacific title at 126 pounds.    Gomera did such a feat even when his best weight super bantamweight 122 pounds.    The fight against Ryan Burnett was supposed to be at the 122 pound division.   According to his coach, that is the best weight for Gomera as he is in his best weight and best shape ever.

Moreover, manager Brico Santig of Highland Boxing in a recent interview pointed out that while Ryan Burnett has 20 fights under his name,Gomera’s 19-fight in his record.   Similar number of fights.  Also same weight.   Both boxers with experience and both have won international titles.

Therefore, this is not as if Gomera is an inexperienced boxer fighting some top caliber fighter in some heavier weight class     Burnett and Gomera are in the same division, similar number of fights.     Both men are 26-year-old.   Gomera is 2 inches taller than Burnett.   Gomera 14-5.   Burnett 19-1.   Gomera is not a patsy.    This decision to deny Gomera is a wrong decision,h Sir Bautista.

Santig also reiterated that this is a most valuable opportunity for Gomera to win a prestigious crown as well as a great purse.   “This is boxing, not chess.”

Furthermore, trainer Rod Michelle Sarguilla has said that they prepared this fight for about 4 months of rigid training under the supervision of a veteran trainer Alan Alegria and former world title contender Fernando Lumacad.

For his fight against Burnet, Gomera has had the support of his teammates, his sparring partners, the ABF champion  Ryan Lumacad, WBL, PBF champion KJ Natuplag, Ken Jordan his family and friends, supporting him in every way.

Gomera has never been alone.   He belongs to a professional team that includes his coaches and sparring partners and trainers, managers, and medical supervision, and most importantly, Gomera is a devout Christian who has prayed daily for this opportunity.

Inexplicably, Dioscoro Bautista denies him the blessing of a lifetime, Because the dream of every boxer is to one day fighting for an important title in the United States or Europe.   Gomera got that chance thanks to his hard work and his prayers and his God.

But was denied by Dioscoro Bautista with no compelling reasons.     Gomera complies with all rules and requirements.   He was approved by the WBC, but GAB just breaks his own rules, and just now, because of this case, made new rules.   Is that fair?
The purse that Gomera was a blessing from God.  Because of his hard work of years.    It was a good purse.  Now he will not earn it?    Will Dioscoro Bautista provide it for Gomera and his family?

According to reports, GAB had already approved Gomera to fight for the same WBC International title against Chinese Xiaojun Qiu who has a better record than Burnett at 23 wins and only 4 losses with 11 of his wins via knock out.  That fight was approved.

The planned bout between Gomera and Qiu had been approved by GAB.  Also approved by the WBC International office.  Why GAB approved Gomera vs Qui.   But denies Gomera vs Burnett?  Why denied this time?

This must be clear:  Burnett has fought total only 20 fights.  Gomera’s has fought total 19 fights.   Both are professional fighters, not rookies.   Contracts have been signed, medical have been passed, WBC has approved.   But GAB Dioscoro Bautista denies.

Gomera’s camp can only hope for Bautista of the GAB to reverse his unfair decision as there was no reason why GAB should not approve the match and Filipino community is watching.     Gomera vs Burnet is a fight.   Not a mismatch.

Should the fight be totally canceled, the Panther’s management and camp say they see it as proof that Philippines’ boxing attitudes have changed.

Because while boxers and managers are doing everything to book fights and win fights, may them be world titles or international titles for that matter to give more glory to our country, at the same time Dioscoro Bautista and GAB are making it harder for Filipinos to compete, breaking the GAB’s own rules, making new rules all the sudden.  Is this fair?

As the management and camp of Gomera appeal the decision of the GAB Boxing chief and GAB Board, the training camp of Gomera continues to get him ready for the fight.    Above all, Gomera continues praying to God that God will help and that he will have the chance of a lifetime to fight for the WBC International title in Europe.

Boxing is a tough exciting sport that is the passion of Gomera.  His wish is to fight Burnett in Europe.   Hopefully, he will.   With God’s help.