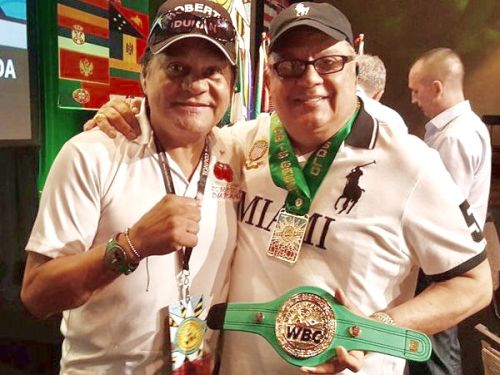 For decades since his youth, Ricardo Rizzo has been attached to boxing, a sport for which he has felt a passion of a lifetime, getting to work and know boxing legends as Roberto Duran and Alexis Arguello.

That’s because Rizzo has done a great job guiding fighters from various stables from all over the world. He has cooperated hand in hand with a large number of promoters and has been very active on important evenings of boxing on Showtime and main television networks in the United States and Europe.

Years ago, upon receiving his WBC award, Rizzo said: “Thanks God for everything.  It has been a hard job directing the careers of many boxers and securing good fighting activity of them.”

“I am proud to be in this great boxing family, guiding many warriors and making world champions, ” added the ever-smiling Rizzo who has traveled around the world accompanying his boxers in world title battles.

“But you have to work hard.  Because there is a lot of competition.  For that reason, I do not stop.  Even some times I had to leave my family on the most important days such as Christmas,”, Rizzo shared.   “It is not easy.”

For many in boxing, Rizzo is one of the most skilled fight matchmaker in the world today.

His ability to do business in boxing, “hunting” for talent and tying up the best fights for his wards is widely known in the pro boxing world.