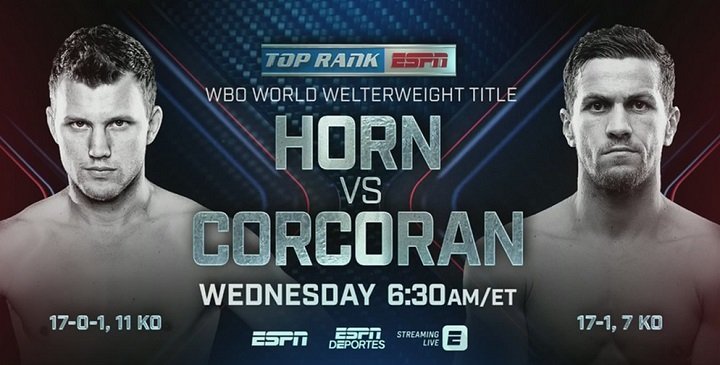 By Chris Williams: WBO welterweight champion Jeff Horn’s trainer Glenn Rushton wants him to make a big statement this Wednesday by knocking out fringe contender Gary Corcoran (17-1, 7 KOs) in their fight on December 13 at the Convention & Exhibition Centre in Brisbane, Australia.

Horn and his promoters at Duco Events and Top Rank have picked such a lower ranked guy in Corcoran, he almost must knock the guy out to be given any credit for the win. The boxing public has been criticizing Horn’s choice of opponent since the fight was first announced 2 months ago. Horn is facing a guy that is viewed as having zero chance whatsoever in beating him in Corcoran, so it’s not a fight that is being taken seriously by boxing fans.

Horn (17-0-1, 11 KOs) is not going to have the luxury of taking a soft opponent for his next fight. Top Rank plans on having him face his mandatory challenger #1 WBO Terence Crawford. However, Horn might opt to fight IBF welterweight champion Errol Spence Jr. or WBA/WBC champion Keith Thurman. The World Boxing Organization would likely allow Horn to face one of the other champions in a unification fight before he faces Crawford. I’m not sure that Top Rank boss Bob Arum would be too happy about seeing Horn steer around the Crawford fight, but it probably makes more sense for Horn to take a fight against Spence or Thurman than it would be for him to face a mere challenger in Crawford. There would likely be more interest from Australian boxing fans to see Horn face Spence or Thurman than there would be for him to fight Crawford.

“First though, we have the challenge of this hungry, determined gypsy from England against an undefeated fighter who just beat an 11-time world champ,” Rushton said to the Courier Mail. “Jeff has trained for 12 rounds but I want him to score the knockout. I want this to be a big statement to the rest of the welterweight division.”

READ  Arum: Pacquiao could face Crawford-Horn or Crawford-Corcoran winner in 2018

Horn is expected to move up to 154 after he faces Crawford, Spence and Thurman. It Horn loses his next fight, then it’s possible he’ll move up to junior middleweight right away rather than bothering to stay and try and get fights against all 3 of those fighters.

Horn looked like a junior middleweight in his last fight against the much smaller Manny Pacquiao last July in Brisbane. Horn used his size advantage to beat Pacquiao. It was a bad idea for Pacquiao to accept that fight, especially with it taking place in Australia. It’s too bad Pacquiao’s promoter Bob Arum didn’t match him against a smaller guy in a neutral country like the U.S. Pacquiao wanted to fight Amir Khan. Instead, Arum had him fight the much larger Horn, who he co-promotes, in Australia.

Pacquiao had said in the past after his fight against junior middleweight Antonio Margarito that he wouldn’t be fighting guys from the 154lb. division any more. Unfortunately, that’s exactly what Pacquiao did in facing Horn. It was a bad mistake Pacquiao to have taken the Horn fight instead of opting for a match against Khan or someone that is a natural welterweight, not a junior middleweight sized fighter like Horn. Fighting in Australia was a bad idea as well for Pacquiao. He needed to fight in front of a crowd that was backing him rather than his opponent Horn.