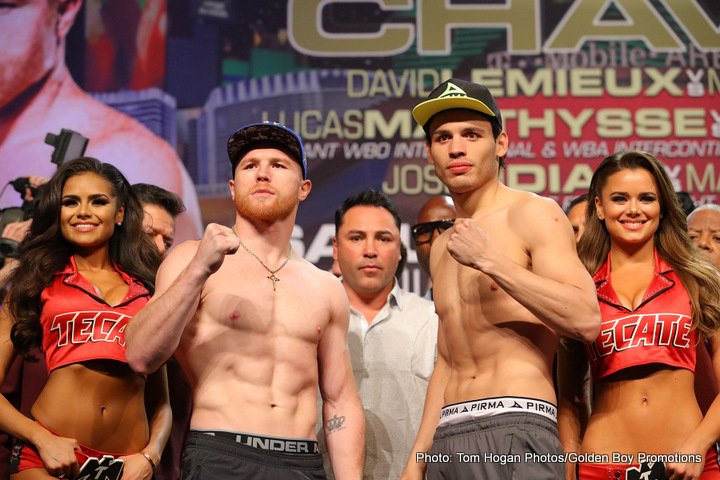 By Jeff Aranow: Trainer Virgil Hunter doesn’t like the catchweight that Saul Canelo Alvarez is using for tonight’s fight against Julio Cesar Chavez Jr. in their fight on HBO PPV. Hunter thinks that Canelo’s habit of requiring that his opponents fight him at catchweights will keep him ultimately from becoming a great fighter in the future.

Hunter thinks that tonight’s Canelo-Chavez Jr. fight should be at the full weight of the super middleweight division at 168 instead of at 164.5, which is what Canelo and his promoters at Golden Boy Promotions had put in the contract for the fight as the weight. There was also a huge weight penalty of $1 million per pound if either guy came in over the limit. That was a penalty that was more directed at Chavez Jr., considering he’s had frequent problems making the 168lb limit over the last 4 years of his boxing career.

It’s unclear whether Canelo is the one that is demanding that his opponents fight him at catchweights or his promoters at Golden Boy. Either way, Canelo is still agreeing to it taking place. If Canelo had an issue with his opponents having to fight him at catchweights, then he would have spoken up by now and told Golden Boy that he wants to fight in traditional weight classes at the full weight instead of the artificially created weight classes that he’s been fighting at since 2013.

It’s hard to believe that Canelo has been fighting at catchweights for so long. It’s as if he’s created his own rules for boxing. Fighting at a catchweight once in a great while wouldn’t be nearly as big a deal as doing them for almost 4 solid years. Canelo did fight at 154 in his last fight against Liam Smith in September last year, but some boxing fans feel that the only reason Canelo did that was so that he would have an excuse for not having fought Gennady Golovkin. Moving down to 154 allowed Canelo or his promoters to show that he’s still a junior middleweight.

“I understand his position is valuable to the company and they have to be careful. If Chavez feels he can make the weight and compete, then that’s on him. Regardless of Canelo demanding catchweights, he’s going to have his fan base,” said Hunter. “That’s the secret of Canelo. He’s going to have his fan base. They’re going to be there. So when you have that and you’re in the position to make demands like that, you do it and if the other guy accepts, he accepts,” said Hunter.

Some of the guys that Canelo has fought, you can argue that they weren’t popular enough for them to turn down fighting at a catchweight. If they had said no to the catchweight request, would they have still gotten the fight against Canelo? I don’t know. Chavez Jr. probably still would have been given the fight if he’d said no, but he chose to agree with it. Chavez Jr. could have taken a chance and rejected the catchweight demand, but who knows? Maybe Golden Boy and Canelo would have walked away at that point and fought someone like WBO middleweight champion Billy Joe Saunders or David Lemieux. Those were the guys that were being mentioned as possibilities for Canelo’s May fight. Golovkin sure wasn’t being talked about.

”Chavez is not a joke to me. He’s a good fighter also. It just depends on how he rehydrates,” said Hunter.” I definitely think it’s going to be a war, and I think Chavez, with his size and his ability, it could be significant. If he’s in shape, he does some things that I don’t think Canelo can offset and hurt him in the zone. If he’s able to get in there and get on his back foot and give him a liver shot, Canelo is having problems, if he’s able to do that. I wish the kid would go ahead and dare to be great. Don’t hide behind anything that is going to be a barrier to your greatness. Right now, you’re fighting at super middleweight. It probably should have been 168,” said Hunter.

Hunter is right about the Canelo-Chavez Jr. fight should have been at the full weight for the super middleweight division at 168 instead of at the 164.5lb catchweight. As big as Canelo is, he clearly doesn’t need a catchweight handicap at this point in his career. Asking for a handicap is strange, especially given that Chavez Jr. hasn’t been all that active and he’s not been fighting a lot of high caliber opponents since 2013. The only quality fighter that Chavez Jr. has fought in the last 4 years since 2013 was Andrzej Fonfara, and he knocked him out in the 9th round.

It’s been a failure for Chavez Jr. since he moved up in weight to 168. He’s failed to make the super middleweight limit three times, and he’s fought only 1 actual fighter from the 168lb division since he moved up to that weight class in 2013. That was Britsch, who is a fringe contender ranked near the bottom of the top 15.

Canelo didn’t need a catchweight Chavez Jr. The fact that Canelo still required it shows that he or his promoters at Golden Boy wanted to make sure that they had an edge against Chavez Jr. It’s hard to respect Canelo in this fight given that he’s using a catchweight, and not fighting someone that has been facing the best opposition since 2013. The fight makes sense for business purposes, because Chavez Jr. is the son of the famous former world champion Julio Cesar Chavez, but it doesn’t make sense in terms of the sport of boxing.

“Even in the Golovkin fight, they offer $15 million, leave it or take it, I hear,” said Hunter. ”That’s probably the most you’re ever going to make, because of Golovkin’s popularity. He’s doing it without a Hispanic fan base. He’s doing it with different cultures. He has a more diversified fan base. So you wouldn’t make what you’re making if not for him; whether they’re trying to get out of that fight. I believe they’re just dragging him until he gets old or until someone beats him, and then, ‘I don’t have to worry about nothing no more.’ I really thought they were going to fight him after Amir Khan,”said Hunter.

What Hunter says about him thttps://www.youtube.com/watch?v=umnOPEafwE4hinking that Canelo is waiting until Golovkin gets old before fighting him is what a lot of boxing fans believe. They think that Canelo is waiting the 35-year-old Golovkin out until he’s too old to be a threat to him. If Canelo doesn’t fight Golovkin in September this year, then you have to consider that as a very real possibility. Canelo won’t fight Golovkin in December, because that month has been set aside for a rematch against Miguel Cotto. The earliest that the Canelo-Golovkin fight could take place would be in May of next year if they don’t fight him in September 2017.