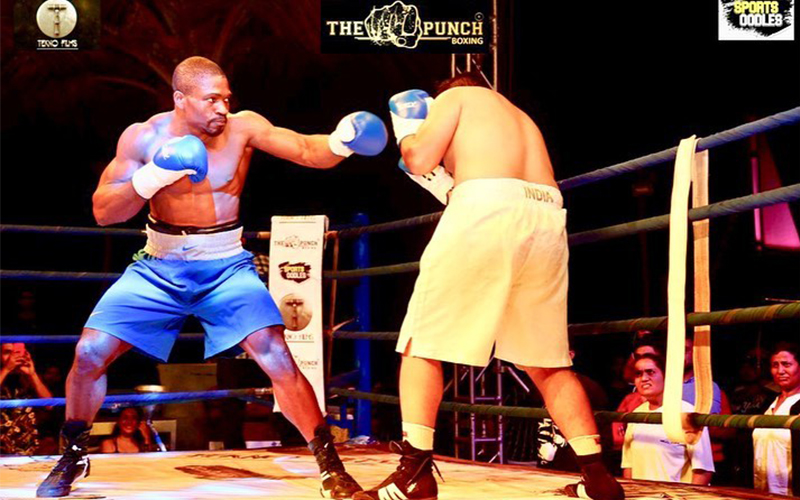 In recent years we have seen Neeraj Goyat become the first Indian boxer to make it into the WBC world rankings, which was followed by Vaibhav Yadav becoming the WBC Asia silver welterweight champion. With a population of over one billion people and a growing interest in boxing, India could become a major market for our sport.

One man leading the way is Arif Khan, founder of The Punch Boxing, a popular promotion in India. Here he tells Mark Wilson Smith all about the popularity of a sport clearly on the rise.

How did you first become involved in the boxing industry?

Arif Khan: So I have a background in media and from there I wanted to explore the sports business with cricket. But somehow I met people who were associated with boxing and that allowed me to become involved in Boxing too. And then I never looked back!

I began my sports business and association with boxing in 2013. We sponsored the Haryana State Boxing Team for the National Games in 2015, and then we organized our first women’s amateur boxing national tournament in 2016 – where around 300 women fighters participated from the whole country. It was my first and best event organizing experience.

What is the current state of boxing in India? Is it a popular sport?

Arif Khan: So if we are talking about professional boxing, then the sport is getting bigger and bigger day by the day! Lots of promoters are in the market now promoting boxers and boxing in India. And the sport is growing its popularity with massive speed. I guess in a short time professional boxing will hit a benchmark as the most loved sport in the country!

We have many amateur fighters turning pro because this sport has all the limelight and glamour which excites everyone. Plus, it’s an amazing experience for fans who get to see their favorite fighters in action!

What do you feel needs to be done to help improve the quality of boxing in India and also to help raise its profile among the public?

Arif Khan: According to me, we have everything in place. We have good boxers, good coaches, good shows, good promotors, good referees, and judges but we need good boxer managers who can be a medium between the boxers and the promotors. Plus, big brands should also come forward to be a part of this glittering action-packed sports and supports INDIAN athletes.

You created The Punch in 2018 – what have been some of your highlights and biggest moments since then?

Arif Khan: I always try to promote my fighters as much as I can. I did my first sanctioned professional boxing show in 2018 in DEHRADUN and after that, it was a GOA show which was a massive hit and benchmark in boxing history. Then we organized The Punch Boxing in Mumbai where fighters from five countries participated like Cameroon, Armenia, Holland, Thailand vs India. Then another show in JAIPUR and then recently in Greater Noida.

I will call all five of these The Punch Boxing nights my biggest highlights because every successful event holds lots of hard work, passion, and commitment.

What have been some of the biggest problems you have faced in that time?

Arif Khan: The biggest problem is always getting sponsors on board because boxing is currently not as popular as other sports. Brands are not sure how beneficial a professional boxing event can be for their brand. But now that the sport is getting popular, things might change – and hopefully, after this pandemic things will be much better for boxing. But The Show must go on and we are coming again with The Punch Boxing in February.

What can fans expect when they watch a Punch Boxing event? What makes your shows different?

Arif Khan: We always try to give an extraordinary experience to our fans from inside the ring and from outside the ring as well. We go through the matchmaking deeply and make sure fights are equal, and fans should enjoy a competitive fight. Plus, fighters should get a chance to compete with an opponent of equal ability.

There is a lot of brainstorming involved in organizing the fight night. Everyone should be happy because, in the end, you are responsible for a good show or a bad show.

Who are the leading boxers in India that fans should keep an eye on?

Arif Khan: Indian boxers are sharp and very hardworking. Sagar Narwat, Akash Girjapokar, Harsh Gill, Chandani Mehra, shiva Thakran are some of the Boxers that are gonna make headlines in 2021

Will we see the Punch Boxing operate in other countries or are you focusing solely on the Indian market?

What are your plans for The Punch Boxing in 2021?

Arif Khan: We are planning for more The Punch Boxing nights and we plan to go global in 2021. Like we are getting global recognition and tie-ups. So hopefully it’s the time that we have been waiting for. The Punch boxing will have associations in different parts of the world.