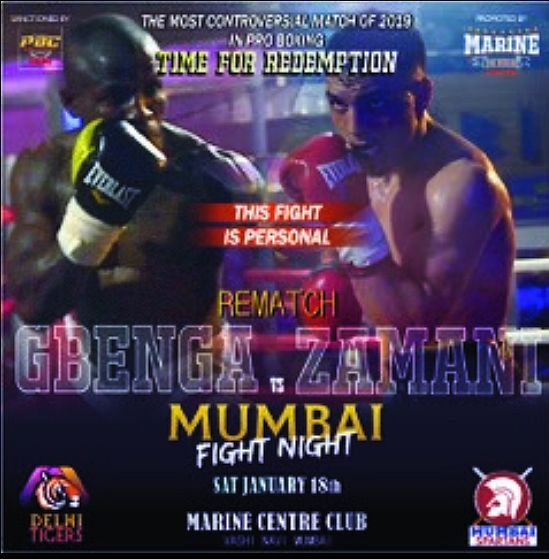 Since the formation of Marine Pro Boxing Promotions in 2019, the boxing scene is exploding in the Indian region, and many other promotions have started following its footsteps.

With over eight shows in India during 2019, Marine Pro Boxing has now expanded its vision to grow the company internationally.

Starting with mid-sized Club fight nights in early 2019 to hosting Boxing at Asia’s largest Fitness Expo IHFF in Mumbai – which saw a turnout of over 100,000 attendees in 3days – now this 2020 has set the bars high for the company.

Devraj Das, promoter of the company, has already made a strategized plan to take the company global in 2021 after it achieves its target in 2020.

This year, Marine Pro Boxing Promotions brings the 1st Fight Night of 2020, which is set in a different theme by introducing boxing Teams which will have boxers joining the teams named after different Indian cities.

Team Mumbai Spartans and Team Delhi Tigers are two of the newest teams being introduced out of the four other Teams, which will be eventually launched in coming months, leading to a massive Arena event in September, scheduled to happen in Mumbai with an expected audience of 10,000 people along with Bollywood celebrities, fashion shows and international DJ’s joining the list.

MUMBAI FIGHT NIGHT – which takes place on 18th Jan 2020 – is a Club Fight night that will have an exciting main event plus five undercard fights.

The undercard fights includes known names in the Indian boxing circuit, whom are Vimal Punera, Suresh Kumar, Vedant Agarwal, Neeraj, and many more.

The show is being set-up with a high production value designed to give audiences a Las Vegas feel-themed in an open air venue with state of the art sound, lights and visuals.

The weigh-in will be made on the 17th of January, followed by a press conference for the media, which will introduce the theme and will explain the show’s main key highlights, plus a list of more shows to be hosted in 2020.

The show will be broadcasted LIVE on the “Marine Pro Boxing Promotions” Facebook page.