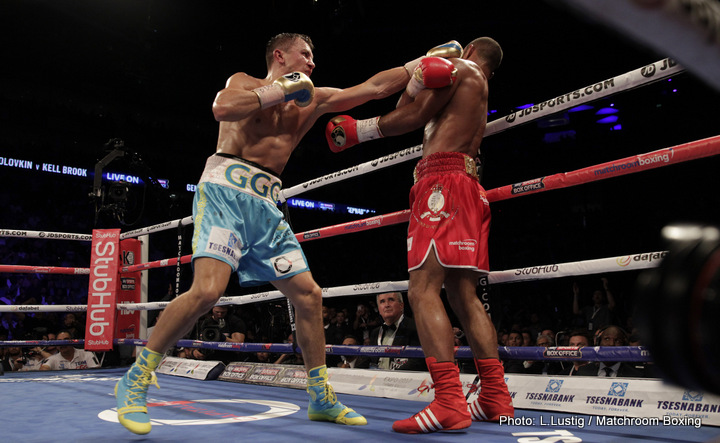 By Scott Gilfoid: Trainer Dominic Ingle isn’t sure what to think about the news about his fighter former IBF welterweight champion Kell ‘Special K’ Brook having supposedly left him. Honestly, it’s a lot of meaningless drama for the average fan to hear about Brook potentially leaving his trainer Ingle. It doesn’t matter. Brook is nearing of the end of his career and it doesn’t matter who trains him at this point.

Rumors sprung up o the internet this weekend about Brook, 32, having split with his longtime trainer Ingle. However, Ingle says he’s heard nothing from Brook (37-2, 26 KOs) that suggests that he’s leaving him for another trainer. Ingle says it’s not Brook’s style to spread rumors on the internet without speaking to him. As such, Ingle says he’s not worried about it.

“I have no idea,” Ingle said to IFL TV when asked about the news of him being let go by Brook. “You never know. I haven’t spoke to Kell for a few days. Who knows? I could be. It could be not, but he’s not given me my marching orders yet. Kell isn’t the type of kid to put it on the internet without having a world with me. That’s not his style. Who knows? There’s no smoke without fire, is there? As far as I know, I’m still his trainer. Who knows? Maybe when he gets back, we’ll have a talk. I’m not concerned at this time. It’s not Kell’s style to put it on the internet. He’ll tell you straight when it comes to that point, so I’m not too worried about it,” Ingle said.

It’s kind of late in the game for Brook to be leaving Ingle, isn’t it? If anything, this is a move that Brook should have done after his loss to Gennady Golovkin in 2016 when Ingle pulled him out in the 5th round. Brook was still on his feet, trying to make Golovkin miss and doing a fair job of it. A lot of boxing fans think Ingle threw in the towel a little too early. The fans wanted to see Brook go out on his shield rather than being pulled out of the fight the way Ingle did.

Whether Brook leaves Ingle or not is pretty meaningless, isn’t it? I mean, Brook is pretty much at the end of his career, looking for a big payday fight against Amir Khan in early 2019, which looks to a lot of boxing fans to be a cash out for him before walking away from the game. It doesn’t really matter who trains Brook for his fight against Khan, because that’s a match he likely wins even if he trained himself. The general belief from the boxing public is Khan’s only chance of winning the fight is if he can get Brook to agree to the 10 pound rehydration limit of 157 lbs for the day of the fight. If Brook is weight drained, then Khan has a real chance of winning, because he’s still blazing fast and his punching power seems to have gotten better following surgery on his right hand.

Brook is in a situation where he has nowhere to go as a fighter. He’s too big to fight at 147, but too fragile to compete against the lions in the 154 lb division like Erislandy Lara, Jarrett Hurd, Jermell Charlo and Jaime Munguia. Brook is calling himself a junior middleweight, but it’s painfully obvious that once he starts mixing it up with the best in the division, he’s going to start taking loss after loss repeatedly. As a result, it really doesn’t matter if Ingle is Brook’s trainer or someone else. It’s not like he’s going anywhere. I hate to say it, but Brook is pretty much at the end of his career in my view, whether he likes it or not. Ingle isn’t going to be able to save Brook from his fate when he starts tangling with the above mentioned talents.