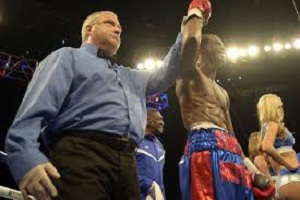 Former U.S. Olympian and personal nemesis Jamel Herring will get his first crack at a world title in the near future. As expected, he will be the opponent for WBO super featherweight champ Masayuki Ito’s second title defense.

Congratulations to Masayuki Ito on his first successful defense of his 130 pound title. Looking forward to his next fight with the fighting marine Jamel Herring.— Bob Arum (@BobArum) December 31, 2018

Herring (19-2, 10 KO) has won three straight since a 1-2 stretch saw him fall to Denis Shafikov and Ladarius Miller. the strongest of the three being BoxRec #142 John Vincent Moralde. He left Al Haymon for Top Rank last January, a move that has clearly paid dividends, as he’s getting a title shot despite not being in the WBO top 15.

We’ll let you guys know if/when this becomes official and what sort of undercard it’ll have/be part of.