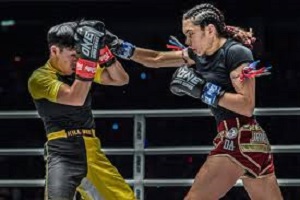 Janet “JT” Todd believes she knows why she lost her first match with Stamp Fairtex, and she will not let that happen again at ONE: KING OF THE JUNGLE.

The Japanese-American first met her Thai rival a year ago for the inaugural ONE Atomweight Muay Thai World Title and was defeated via a narrow unanimous decision victory after five close rounds.

Ahead of their second meeting this Friday, 28 February, at the Singapore Indoor Stadium, Todd explained to ONE announcer Dom Lau what needed to change with her performance and how she plans to use that knowledge to win her first World Championship.

“That was my debut fight, so I think there was a little bit of the first-time jitters and I think the confidence really came out in the fifth round, so I’m going to show that same confidence in the first round this time,” she says.

Watch the full video to hear more from Todd, including how she has adapted to this rematch under kickboxing rules and how she stays calm under pressure on a big occasion like this.

Singapore | 28 February | ONE: KING OF THE JUNGLE | How To Watch
* Visit our shop for official ONE Championship merchandise!