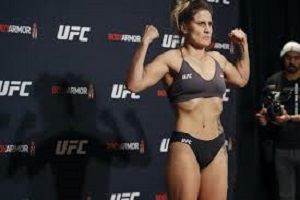 Brazilian flyweights Jennifer Maia and Viviane Araujo have agreed to meet in the Octagon at a yet-unannounced UFC Fight Night card on June 27, multiple sources told MMA Fighting following a report by Combate, who added that the event is expected to take place in Austin, Texas.

Maia (17-6-1) attempts to rebound from a decision loss to Katlyn Chookagian after winning back-to-back decisions against Roxanne Modafferi and Alexis Davis.

Maia, a former Invicta FC flyweight champion, failed to make weight in her previous two UFC bouts and went 1-1 during that stretch. She has hired a new nutritionist after her No. 1 contender bout with Chookagian, MMA Fighting has learned.

Araujo (8-2) suffered her first Octagon defeat this past December, losing a decision to Jessica Eye after scoring consecutive wins over Davis and Talita Bernardo. An ex-Pancrase strawweight titleholder, she was riding a five-fight winning streak with four stoppages going into her fight with Eye in 2019.