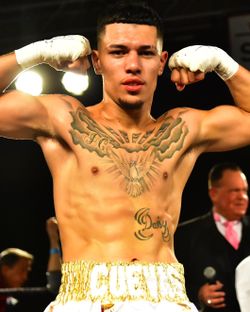 Press Release: This Saturday night, Philadelphia lightweight Jeremy Cuevas is looking to knock out Jerome Rodriguez (7-9-3) in the six-round co-feature bout at the 2300 Arena in Philadelphia. The eight-bout card is promoted by Hard Hitting Promotions. In the eight-round main event, heavyweight Darmani Rock (12-0, 7 KOs) of Philadelphia takes Pedro Julio Rodriguez of Miam via Cuba.
Cuevas of Philadelphia is on the cusp of higher profile fights, but first must get by the tough southpaw, Rodriguez from Allentown, PA.
“My training was great.  My weight is great.  I got awesome sparring with (IBF junior lightweight champion) Tevin Farmer, (undefeated) Joseph Adorno, and some other good southpaws,” said Cuevas.
Rodriguez has faced ten undefeated opponents, which includes wins over Avery Sparrow and then-undefeated puncher Tre’shawn Wiggins.
“Rodriguez is a tough fighter.  He has been in there, and has defeated good fighters.  The challenge for me is not to beat him, but stopping him.  My objective is to knock him out cold.”
Cuevas is now starting to get recognized on some prospect lists, and those acclaims are very motivating to the 22 year-old. “This is a dream come true.  I have been blessed to be with the right team of people.  That has helped me to start to get noticed.  People fear me because I am  a slick southpaw that can punch.”
With bigger fights and names on the horizon, Cuevas is just taking one fight at a time, as he knows his time will be coming in the near future.  “I want the top guys, but my coach tells me that there is no rush.  I am just 22 years-old, and, I am going to take my time.  This should be my last six-round fight, and my next fight should be an eight-rounder.”
Cuevas wants to follow in the footsteps of Farmer and Danny Garcia to become the next world champion from the historic fight town of Philadelphia. “I look up to those guys, and being from Philadelphia, you have a standard.  This city has such a rich history of boxing, that is has given me a pathway to become a world champion.”
Cuevas has fought all but one of his fights in Philadelphia, and this has given him the opportunity to start and grow a sizable fan-base that will root for their hometown fighter. “It means the world to me to fight at home.  Every fighter is not lucky enough to build themselves up at home, so it’s great that I have fans, and soon it will be time to expand my following outside of Philadelphia.  I am ready to go on Saturday, and I am coming to put a hurting on my opponent.”